April 04, 2018
A series of boards were made which each had an IO expander onboard. These expanders required power, ground, SDA, and SCL connections from the controller. For the time being, only these connections would be used so things like addressable LEDs weren’t natively supported.

Three images were captured for each board. The first image, with a black background, was the layout view of the board which shows all layers, front and back.  The second image was the front of the board, as it would appear when produced with green soldermask. The third image was the rear of the board located at the bottom.

Each board was the same length with the same mounting screw configuration. The pins along the side were arranged the same way so they could easily connect to adjoining boards. These were the same arrangement as the controller board to ensure compatibility.

The IO expansion boards require three of the pins to be set high or low in hardware to give the chip a three-bit address. These pins were broken out into three sets of three header pin holes so the holes could be jumpered to ground or voltage.

A 4x4 grid was made with keys at the standard 19.05mm (0.75”) key spacing. This spacing is standard across most keyboards but also fits standard keycaps. The 4x4 uses all points from a sixteen-point IO expander. This type of configuration could be used for a number pad, most of a home row, or an off-hand macro keyboard.

A 1x4 board was designed to use an eight-point IO expander. The four unused terminals were broken out along with some ground pins so additional switches could be attached if desired. 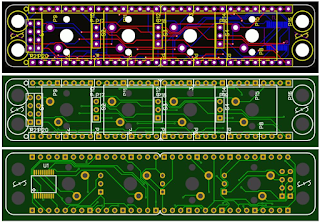 When the 2x2 board was created, it used the same methodology as the 1x4 with breakouts for unpopulated IO points but the board was shorter than the previous boards. The hole pattern was maintained at the ends. Connections to the side were simple feed-through ports for I2C and power. These boards were not meant to be mounted next to the 1x4 or 4x4 boards but they could serve as a button array for the thumb apart from the regular board.

The 2x4 board was arranged the same as the 1x4 except twice as wide and each switch was broken out. Each column of four switches had four switch terminals and four ground terminals. 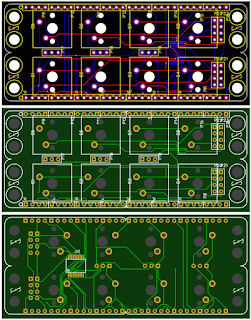