September 17, 2018
During a recent dance party I saw a guy in costume using a feathered hand fan as a prop and to keep cool. Since concentrating doesn't make me a better dancer, I got to thinking about the practicality of a bringing a folding fan to a dance party. One thought lead to another and I decided it wouldn't be my style to carry a feathered fan but a fan with electronics could be right in line.

I let the idea settle for a few days since projects like this can quickly be put the back burner and simply written off as a fun idea that isn't worth the time-investment. More than a week passed and I didn't forget the project, only refined it in my mind.

Research was done on the viability of addressable LEDs for the edge which would create a POV effect. Normally, WS2812 chips would be used, they're sometimes called NeoPixels. It turned out that these LEDs were not a good choice due to the flickering effect caused but another version, APA102C, are suitable for POV effects because of their faster PWM rate, and they are sometimes called DotStar.

This is another project which was not completed and will be marked INCOMPLETE on the last posting. There is valuable information on this project, such as the above tidbit about NeoPixels versus DotStar addressable LEDs. There are also the changes to a board design which are good lessons.

A schematic was drawn on EasyEDA for a circuit which included a microcontroller, supporting components, voltage regulators and sixty LEDs. 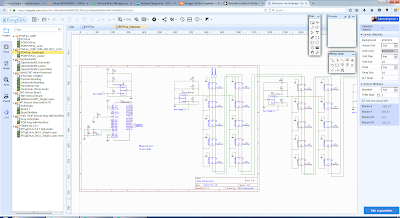 Each group of ten LEDs also had a voltage regulator although the data lines and ground were shared. Sixty was the number based on the 5mm wide package and that would create a string 30cm (12") long which seemed like a reasonable size for a fan. 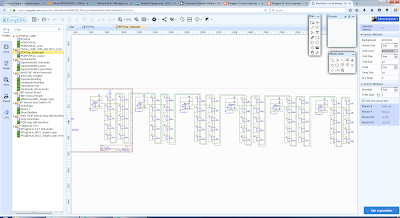 Sixty LEDs used in the schematic

Parts for this design were selected based on their availability from LCSC.com, the same company as EasyEDA. Choosing from these parts meant that the schematic symbol was usually paired with the corresponding footprint which would be used in the board layout later. 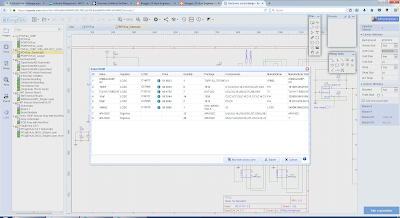