October 22, 2018
Animation is hard. So when I wanted to create some simple characters my choices were either laborious or out of my skill set. For example, drawing figures is not my forté. I can draw electrical schematics all day and sometimes I do in my career. Instead, I decided on puppets but I wanted to start slowly. With LEGO movies coming out it seemed logical to jump right on that train and use minifigs as puppets. Unlike a fuzzy muppet, these won’t have any articulation so it’ll have to be a dialog-based skit. If necessary, stop-motion could be employed for arm and leg articulation but that may be a future issue rather than something to worry about right away.

A rudimentary stage was built on a flat plastic sheet. The premise was to have a well-lit stage which could move the minifigs around from the other side using magnets. Magnets would be installed in the feet of the minifigs and strong magnets on the other side of the board would be controlled by the actor(s). 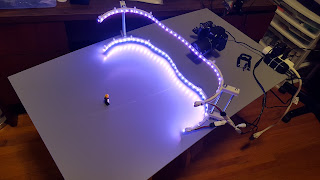 Light encircling the front of the stage was provided by RGB light strips. It would have been possible to use white LED strings which did not require a controller but the RGB allows for the set lighting to change if the situation warrants. A camera was mounted so that a macro lens and sufficient zoom would show the minifigs clearly with a blurry background. It will also be possible to simply hang backdrops behind the figures. 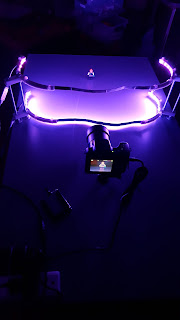 The minifig can be seen on the camera's screen


The final trick of this stage will be that it will be flipped upside-down during recording. The advantage to doing this upside-down is that the minifigs can be manipulated just like sliding a chess piece across a board. As long as the magnets are strong enough to hold the minifig to the top and the camera is upside-down, there shouldn’t be any problems.

Holding the lights in place was done by printing arcs with bolt holes. The arcs provide a shape that points light at the center of the stage while the bolts allow the lights to be adjusted up and down. Four were printed; two for each side. These arcs were designed in OpenSCAD. The code and models can be found below. Zip ties were used to hold the lights in place rather than the PSA included with the light strips. 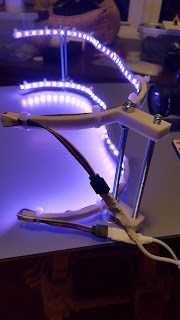 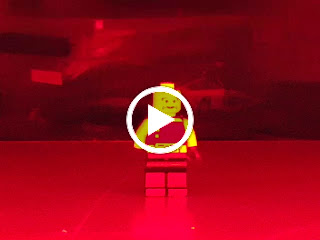