December 01, 2018
Testing on ModuKey boards was in full swing. This was mostly done with scraps of wire bridging between GND and all the inputs which needed testing. The old ModuKey program was put into the controller so that it would output serial data about which input was pressed, but it also typed on some "presses" since the keyboard was still active and other buttons would change the platform-mounted LEDs to green. This LED control proved to be useful and may be implemented into a testing phase later where all recognized button presses alter the LED color.

Like the first ModuKey build, this one has two halves, but instead of connecting them with straight wire, this version used a coiled phone cord. Fastening the wires to the boards was not simple. Some 1/4" (6.35mm) cable clamp was mounted to the board, and the cord was wrapped with a long strip of electrical tape to allow the clamp to tightly grip. 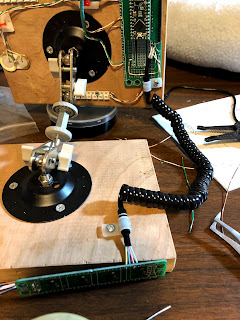 The second half of keyboard connected

With the data connection established, the second half of the keyboard was assembled. Board-to-board jumpers were made the same way as other board, and it seemed to have fewer troubles as a result of doing this a few times. 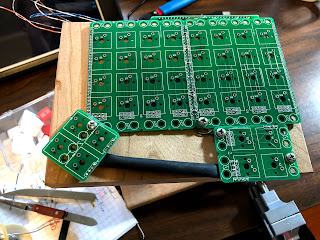 The second half of keyboard assembled

No connection could be maintained on the 1x4 board of the right side. This was the same board I had trouble with on the first half. The chip was desoldered, resoldered, pressed, squeezed, twisted, desoldered again, resoldered yet again, and possibly destroyed in the brutal process which left the board visibly scorched.

It turned out that the RESET pin on these boards was never appropriately connected on the PCB. This is something I discovered months ago in the first build and forgot. Shame on me for not reviewing my notes. That will need to be fixed in the next revision of the PCBs. 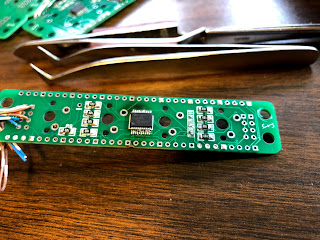 Scorched chip and board

Instead of fighting the troublesome RESET pin, I decided to try a board I had not used before. This board was a compact 1x2 with an IO expander IC on it and mounting holes. The IC was soldered into place and added to the system where an I2C scanner saw it in no time flat.

The untested 1x2 board was also a bust and lacked all the proper connections. Those also need to be fixed in the next revision of boards. This time, a known-good board was selected. One of the wide prototyping boards was selected. It could be used to add a joystick or something in the future, but in the meantime, it will be a stand-in with nothing connected. 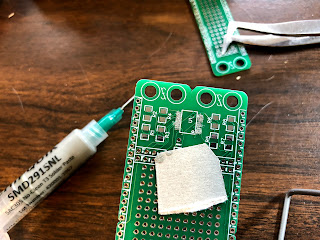 Populating a prototyping board