December 03, 2018
The PCBs were connected and tested with the ModuKey program which outputs serial data about pins being pressed. IO point 3 on board 5 was not responding. Visual inspection of the chip showed a questionable soldering job which was fixed with a soldering iron and a steady hand. The program confirmed that the pin, and all others on that board, were connected properly. 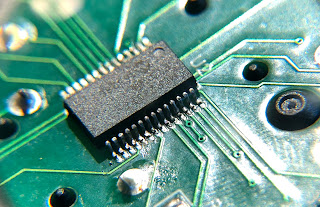 IO 5,3 would not connect due to a loose pin

Once all the connections were confirmed in software, the directions on the board to "SOLDER SWITCHES LAST," was followed and forty switches were soldered by carefully holding a switch to the vias, adding solder, and letting go to solder the second hole. This was relatively easy, and after forty switches, was a well-learned skill. 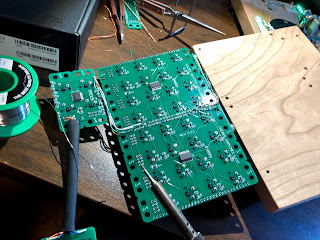 After soldering every keyswitch, I found that the small boards with mounting holes on the inside were supposed to have a screw placed below the keyswitch first. Oops. The keyswitch was removed and resoldered with the screw in place. 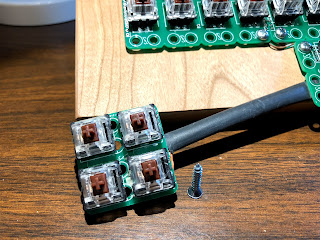 The screw was supposed to be inserted first

Shrink tube between the 2x2 boards at the bottom of the keyboard was shrunk now that all the connections had been tested and keyswitches were added. The hot air soldering station was used to shrink the tubing. It had to be held far away and moved swiftly to avoid damaging the tubing. 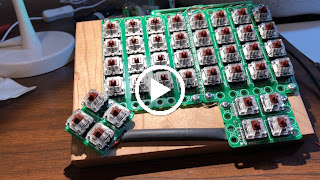 The PCB at the top of the left side was meant to apply pressure to the IC, which may have been ill perceived cause and effect, but to give the option of applying pressure, the leads from the keyswitches were clipped short, almost flush with the board. 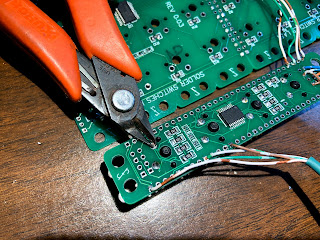 On the second half of the keyboard, the screw on the 2x2 board was inserted before the next round of forty-four switches were soldered in place. This half had four extra keys at the top of the wooden platform. 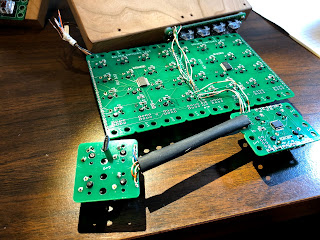 Nylon spacers were placed between the PCB boards and wooden boards to make clearance for the ICs, resistors, and keyswitch leads. Once assembled, it was a lot easier to move them around as a unit without the wired units flopping over all the time. 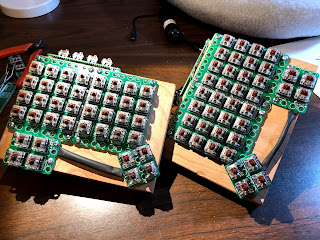