December 05, 2018
The diamond-shape key arrangement had the unexpected consequence of interfering with the nearest key. This problem happened on both halves of the keyboard. Differently shaped keys, including round keys, were considered, as well as cutting up some of the non-square keys or printing new keys.

Two of the inexpensive blank keys were modified. The first tool was a razor saw, which can be seen below the round needle file which was also used. Neither of these tools were effective at reshaping the ABS keys. 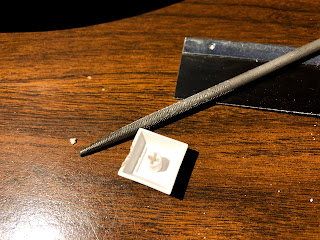 A sturdy scalpel seemed the best option for this modification. A Dremel may have also been a good choice for such fine work but the scalpel was an easy choice for modifying two keycaps and did not require an outlet or cleaning my desk. 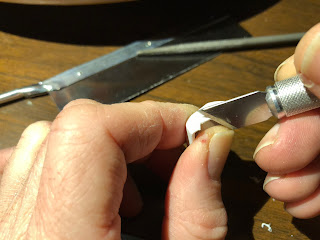 The kind of photo taken right before an emergency room visit

Once cut away, the top of the keycap was entirely intact and felt the same, but the clearance issue was gone. There was no trouble pressing the key even while the keybelow it was fully extended and most prone to interference.

A black background, spotlight, tripod, and camera were set up to take a rotating shot of the keyboard, with all of its keys attached. At this point, the keyboard had received all of its major structural parts but needed programming. 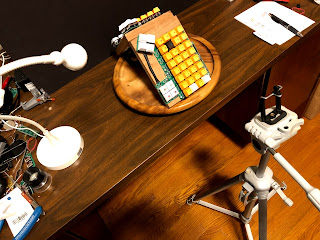 Setup for a rotating photo animation

A burst shot was taken while the keyboard was spun by hand. A couple of the photos were of overlapping angles so they were deleted. The images were scaled in GIMP to reduce the file size, and turned into a single animated image. This keyboard has been named Lazy Brown Dog.