February 02, 2019
Lazy Brown Dog introduced a new method of input, a cluster of keys which would likely never be pressed in normal operation, and impossible on some keyboards, was implemented which would trigger a macro in AutoHotKey. AutoHotKey has the advantage of easily discerning which program is activated to determine the appropriate macro and macros can be written more easily than rewriting and uploading the to keyboard hardware. For now, AHK only pops up a text window indicating that the input was recognized. 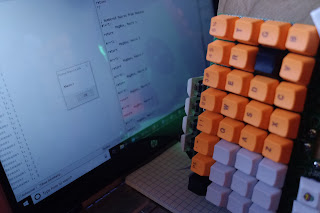 Another new addition was the feature of pseudo-random number generation in the form of virtual dice. D4 through D1000 is accessible from eight different buttons,, and the buttons below them roll the equivalent die and press <enter> immediately after. This was also the source of some confusion when I thought the keyboard was in Numpad mode, but unpredictable numbers kept appearing when pressing the same key. 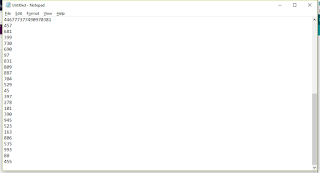 With the first layer sorted out, moving to the next layers revealed the lights were not displaying correctly. Since I did not know what layer I was on, it was hard to know what keys I should expect. The code from the previous keyboard did not work since the old keyboard had two layers and this has four. After the color changing issues were worked out, the colors were also expanded so that a wider variety of colors were available.

Exciting color changes were on my list of desired improvements, so I kept moving in this vein. Previously, when the layer changed, the colors would snap to the desired color as quickly as possible, which will remain the default but I created a list of animations I wanted to be able to switch between, and the first was to fade from the current color to the new layer's color.

The next animation I wanted was to change the LEDs one at a time. A lot of scaffolding code for the color fading was useful for this animation style, so it did not take as long as the first.

Another animation I wanted was to flash pseudo-random colors, then come to rest on the new layer's color. For some reason, that code did not work well and rather than fuss with it, I scrapped it all and moved to the next animation which was to turn off the LEDs sequentially, and then turn them back on, in the color of the new layer.

Changes in color with bouncing animation