February 07, 2019
Many of the loose ends, like layer and style notifications, had been tied up, so it was time to get back to verifying the layers and ensuring that all the keys did what they were supposed to be doing. Layer one had been getting quick fixes along with the rest of the coding as it was convenient, but it had not been successfully tested from start to finish. This test turned out well and confirmed that the little fixes were done well. Layer one, the usual typing layer, was operational except for a keyswitch which needs to have the solder joints redone.

Layer two was checked. This layer used the right half as a NUMPAD, arrow keys, and some of the other navigation keys like HOME, END, PAGE UP, and PAGE DOWN. These will likely be used with the layer shifting keys while the left side of the keyboard had functions and macros associated with Audacity. A few things needed attention and were tracked on the paper shown below. Some of the keys on board 7 needed to be rearranged, and one key turned the lights red. The red lights were a small code remnant that was removed, and the problematic keys were rearranged. At first, only the button presses were corrected so there was a time when the ESCAPE key was held for a full minute and it only caused problems.

Layer two was fixed up in a single day, and this whole post was written with only the Lazy Brown Dog keyboard, including the 7 above which was typed with the NUMPAD on layer two and the seven in this paragraph which was from the main keyboard on layer 1. 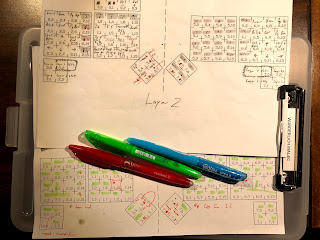