February 14, 2019
Home automation should not necessarily feel like speaking unnatural dialog to a computer interpreter. It can feel casual or structured, whimsical or dry. In this case, I wanted a hot water kettle to start heating my water with the phrase, "Computer, tea, Earl Grey, Hot."

Enough background.
----------
Inexpensive wifi switches capable of control though Alexa were purchased. They cut or supply power to a device by interrupting a power cord. There is no connection for a ground terminal, so it is easiest to use an ungrounded cord. Fortunately, the tea kettle being automated did not have a ground wire. 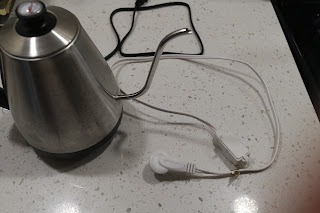 The first attempt was on an inexpensive white extension cord. This was done first since it could be replaced or recycled if there were problems without destroying the kettle.

There were markings on the module indicating the hot and neutral connections. Even with these wires reversed, it was possible that the module would turn on, and even switch a device on and off. Reversed wires would present a dangerous situation since it would mean that a hot wire could be exposed, as was the case with this kettle where a small metal tab was exposed on the outside of the base. This metal tab was not pictured, but it would be equivalent to the outer ring of a light bulb socket. If this exposed metal were to be electrified, the risk of shock would be unacceptable. Marks were made on the wire so the neutral wire was easy to track.

The extension cord was cut in the middle, the wire ends were stripped, and ferrules were crimped onto the ends of the wire. Crimped wires were too large to fit into the smart plug's terminal connectors. These had to be removed, and the wire was stripped back farther. Lesson learned. 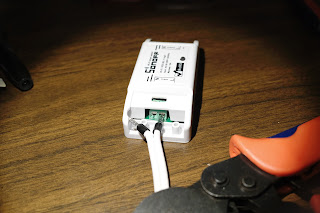 A great deal of effort was given to ensure that the positive wire went to the correct terminal, and it was checked after plugging it in, but the module would not start. It seemed that it could have been a problem with the inexpensive modules not wanting to pair, but after troubleshooting for fifteen minutes, the problem turned out to be that the incoming power was routed to the switched side and the switched side was connected to the incoming power. 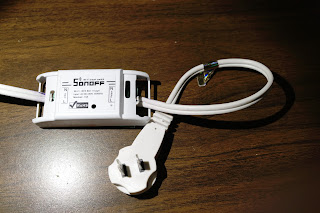 The extension cord was correctly rewired and tested. No more issues were found with the procedure, so the kettle power cord was unplugged and cut after marking the neutral with black marker on masking tape. 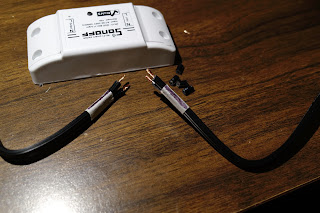 No mistakes were made with the tea kettle modification. Most of the time for this project was spent trying to use the exact phrase with voice recognition. The routine had to be programmed in the Alexa phone app as opposed to creating a scene in the app which works with the wifi modules.