February 22, 2019
Where I work, I have to prop steel doors open all the time. These doors are part of industrial enclosures. If you have ever been in a factory, they are the gray metal boxes usually hanging on a wall. The enclosures range in size from a desktop computer case to a closet. The smallest ones sit on a tabletop while I test them and it is often possible to wedge something between the door and the table to keep the door from swinging shut and interfering. The free-standing ones are more difficult than the small ones, so I wanted to make something that would work for any steel enclosure and be easy to move around. Naturally, I was attracted to the idea of using magnets.

The design was nothing more elaborate than a couple of magnets with a string between them. During the build, important issues came up, so this became more complex than tying two cheap magnets together.

Enough background
----------
Hook magnets were ordered online. They were less than ideal because they had open hooks rather than eye-bolts or carabiners. They also used ceramic magnets instead of rare earth, neodymium. A couple of steel cans with flat surfaces larger than the magnets were covered in plastic food wrap. The liquid electrical tape was opened an mixed with a disposable chopstick. It had been sitting for several months.

The bottoms of the magnets were uncoated so it would have been possible for them to scratch the surfaces I was interested in protecting. Rubber coated magnets were available for purchase, but they were significantly more expensive.

Parachute cord was tied between the hooks of the magnets. Rubber bands were added at the hooks to keep the knots from falling off the hooks. 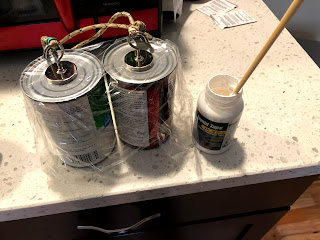 The liquid electrical tape was painted on the bottoms of the magnets. This was a bit messy since the consistency of the tape was lumpy. The smell was also strong and should be done in a well-ventilated area, as per the instructions. 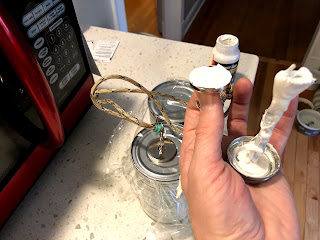 Once the liquid was applied, the magnets were set on the covered cans, and the plastic was pulled tight, so there were no wrinkles between the food can and the magnet. Some of the liquid spilled out and was left alone. 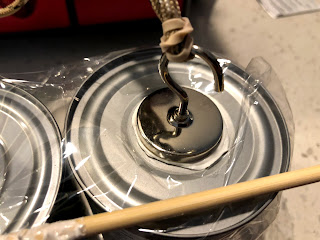 Making a nice flat bottom to the coated magnet

The liquid tape was allowed to dry in the garage where the smell would not be noticed. The chopstick used for mixing was dried with the rest so it could be safely disposed of once dry. It was unknown if the liquid tape would bond with the plastic food wrap or simply peel away later. 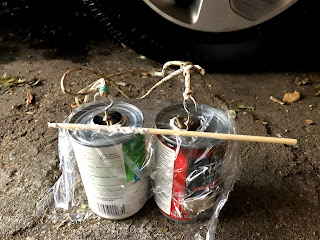 Allowing the liquid tape to dry

When the tape was dry, the plastic was pulled away, but it had bonded. Instead of fighting it, the plastic was cut away, and a small circle of it was left in place. Ordinary scissors were used to cut it, and during the process, they stuck to the magnet repeatedly. 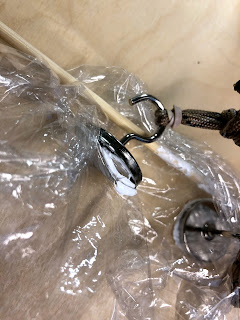 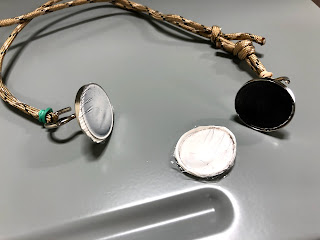 There were stronger magnets at the local surplus store, and they came with loops instead of hooks. Aside from not being rubber coated, these were ideal. They were roughly three times the cost. 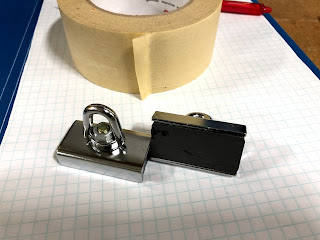 The new magnets were coated on the job with masking tape. Masking tape was chosen because it should last several years, it was available, the width of the tape was enough to cover the magnets, and it had some cushioning because of its makeup. Two layers were used. 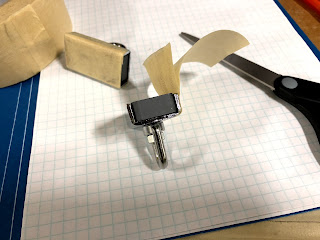 A coating with higher friction may be a valuable step in the future, but the magnets work admirably on a large door. Vinyl coating or PVC tape may be a good alternative. 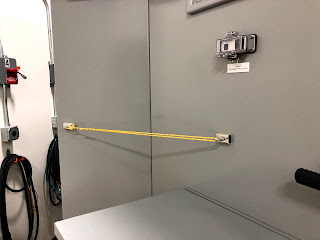