March 06, 2019
Components were scrounged from on-hand parts. The main pieces were operators such as potentiometers and switches. Some of the switches in stock were high quality but mean to be mounted underneath a larger button so pressing them was pushing down a plastic plunger. 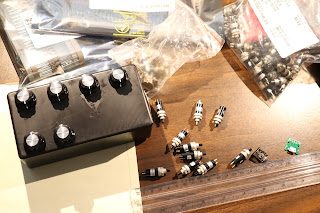 Components found in the workshop

There was a lot of help from my assistant who was happy to assist in any way she could. Part arrangement a short discussion of game theory was a big help. 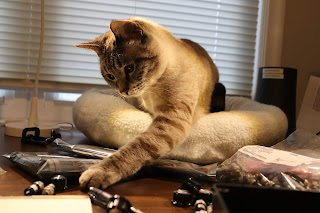 Isla helping me with toys switches

The plan was to have six potentiometers, but they were arranged differently than originally intended. Switches were also different, and there were going to be 3-position momentary toggle switches, but those were not in stock, so only buttons were used. Their arrangement was intended two groups of two switches with two potentiometers on the left. On the right, there are a couple of potentiometers and six switches. Their functions had not been decided yet. 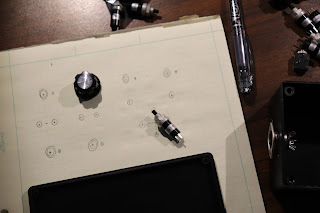 All the necessary holes were drilled in a plastic enclosure that was on hand. It was tempting to put the holes in the opposite face of the box which didn't have seams, but this project was not meant to be cute, so this panel was used since it would be easy to work on. This was a good choice. 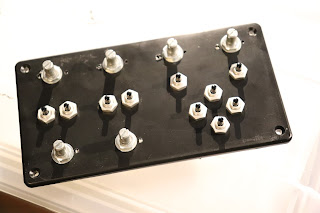 Operators mounted on the enclosure face

The anti-rotation holes for the potentiometers at the top were drilled a second time so they could face the other way or it would have been difficult to solder to the terminals underneath. In retrospect, it may have been beneficial to mount the potentiometers ninety-degrees from this so power and ground wires would run in parallel.

A micro USB breakout board was also mounted on standoffs which would act as a power terminal. This is the green board in the picture below. 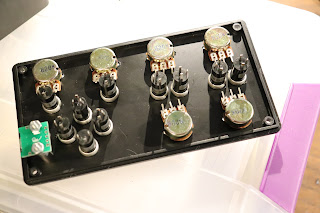 The underside of the enclosure face