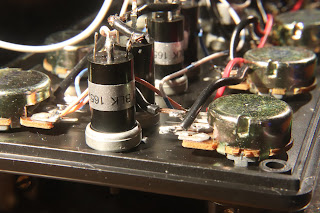 Loose wire on a potentiometer

The problem with faulty readings was not fixed. If anything, it was worse. Changing one potentiometer would affect the readings on two others and not a one or two percent change, it acted like the potentiometers were wired in series. Of course, they were not, but the readings were unusable. 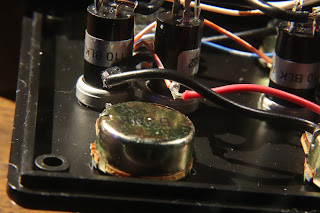 There were a couple of options. It would have been possible to unsolder the whole project and replace the controller. It would have been even more straightforward to cut and strip the wires then put them all under a screw terminal processor board, which was sitting on the shelf. Ultimately, it seemed like the best course was to abandon this hardware in favor of starting a new version of the project with more inputs and more reliable parts.

For the second phase, the idea was more complicated than generating one prandom note at a time. There would be a note generator, similar to what has already been built, but instead of playing the notes directly, they would pass through different modules which would add to the signal by choosing new instruments, adding chords, and a few other factors.

Version two could be done with a board for each module. An Arduino Micro Pro would be the controller since it has better debugging potential than an Arduino Pro Mini. Each subsequent module would use a Mini since they were less expensive.

Another option, which would be easier to program, was to put everything on an Arduino MEGA which had enough inputs for a controller and five modules. It could still support external modules chained to it but it should provide an easier foothold. 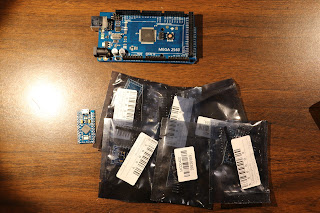