March 18, 2019
The decision was made to program on an Arduino MEGA. Those boards had become accessible due to their long time on the market and low price despite robust hardware. They had numerous data ports so online debugging would be simple, and there was even an option to rewrite the firmware of the 16U2 chip which translates between the controller chip and the computer's USB. Reprogramming it would allow for MIDI over USB.

Layouts for each portion of the device were laid out. There would be a controller portion with four potentiometers, two toggle switches, a screen, and four MIDI serial ports. Two of the ports would be MIDI in, and two would be MIDI out, and there would be a DIN connector and a 3.5mm socket. 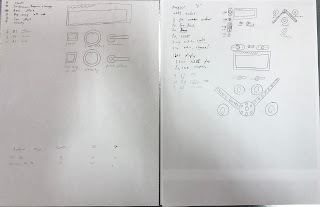 The layout for the controller was going to have LED strips to show which note was being generated about the previous one, but the LEDs were left off for the time being. The MIDI connectors were placed above the screen, and the operators, like potentiometers and switches, were mounted below. Keeping the layout to this format ensured that the user's hand would not block the screen while making adjustments. 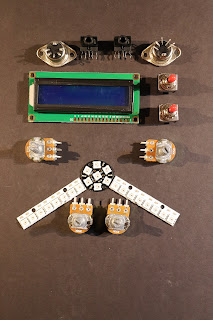 Potential parts for controller and layout

The less complicated secondary modules, which would determine the instrument and how it was played, required fewer parts. Each module would have its own screen, and even though the displays need six wires, five of them can be reused on all screens, and only one unique connection is required for each new screen. 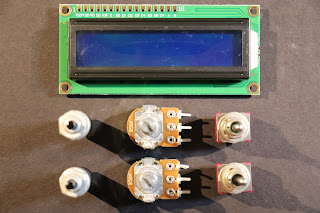 The layout was streamlined, and LEDs were removed from the control module. Positions for each device were marked on a piece of paper to be translated into plastic later. 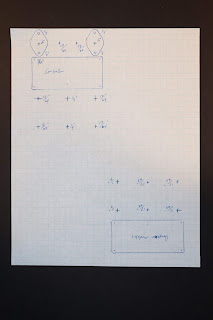