March 21, 2019
Each secondary module would need a bundle of sixteen wires from the Arduino and some wires needed to go to a couple of places at the same time, like power and ground. There would be six modules coming from the board, one for the main controls and five for the secondary modules. It would be possible, but messy, to run extra wires for every power and ground after splitting them off the Arduino.

Plans were sketched to give each module a prototyping board which could fit all the incoming wires. Components like pull-up resistors, contrast-adjusting potentiometers, and current-limiting resistors were also added to the board to keep the Arduino clean. 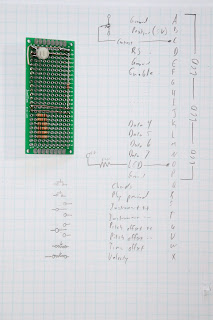 One board was assembled to test the positioning and viability of the design. There was plenty of room for everything, and the boards were already stocked. 10KΩ resistors were used for pull-ups, and a 220Ω resistor was used for limiting current to an LED. 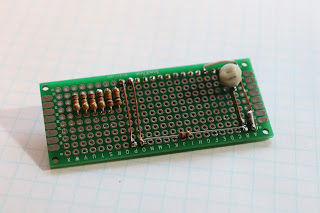 The first side of one module board

Both sides of the prototyping board were used. Space constraints were not planned before soldering, and things became spread out more than necessary which was better than a cramped board that was large enough to accommodate everything easily. 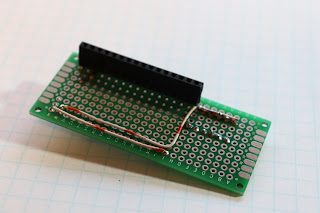 The second side of the first module board

When the boards were gathered from stocked equipment, the plan was to attach them under the LCD screens so mounting would be solved. If the wire bundles don't interfere, this should be a solution. The potentiometer on the bottom meant to adjust contrast was originally going to be on the top which would have put it between the LCD and the board so any adjustments would have been difficult. 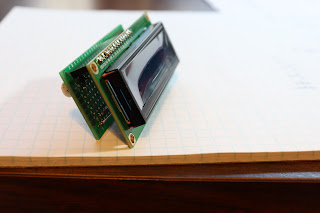 LCD and prototyping board