April 10, 2019
NFC (13.56MHz) scanners are generally more expensive than their low-frequency (125KHz) counterparts, and that extends to the products they come in. The only exception to this seems to be maker modules which usually feature the RC522 and tend to be less expensive than the EM4100. Both cost less than $2USD when this was written.

The Rothult from IKEA is more expensive than the low-frequency counterparts, but at $20 it is competitively priced and carries the brand support. For some people, NFC is the best or only option, and this is great. Its biggest downside is that it can only learn one additional NFC tag in addition to the two master tags that it comes with. For people with NFC implants, this is a practical low-security lock as long as only one person needs to get in, or everyone else has an NFC tag with a reprogrammable UID.

Rothult was meant to be installed in IKEA furniture with a precut socket. It was a little deadbolt with no parts accessible from the outside, which seems like a problem if the battery were to die. 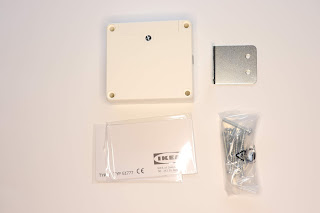 Under the case was a metal drawbar driven by a cam with a nylon bushing, a vertical PCB, and shrouding that hid a gear train. These components were listed from left to right as they appear in the picture. 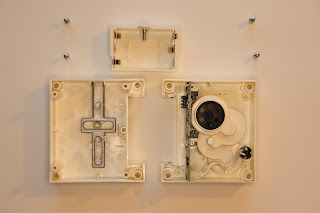 On the back of the PCB was a JST connector with wires to the motor. Two microswitches would be activated by the drawbar and act as limit switches. Presumably, this could be repurposed to run a different motor via NFC, then reverse it. Relays and diodes could also be implemented to drive heavier loads than the light drawbar. 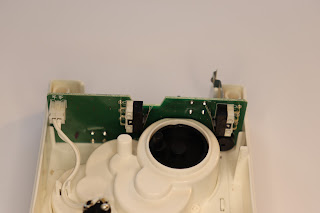 The other side of the PCB held most of the components including a controller and an NFC scanning chip. Both chips in this model were made by ST. It is possible to read the model numbers from the full-resolution photo. Here is a splendid teardown of the Rothult which goes deeper into the components. In this case, the NFC scanning chip was different than the other teardown, but the controller remained the same. 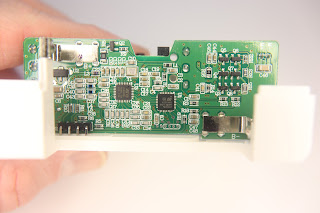 The most interesting thing from the grinder perspective may be the header pins at the bottom of the PCB which connects to another PCB. This was the antenna and placing it on a header was good news. 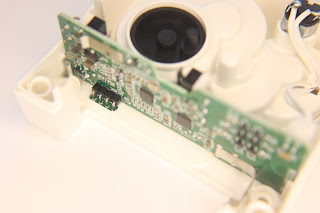 The antenna was hidden under a panel which was never meant to be accessed by a user. Clips for the door released when pried from inside, but a bit of torque removed the panel without significant damage. 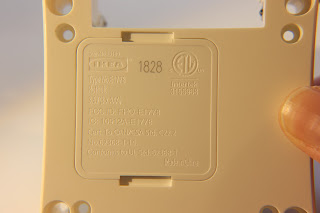 The antenna was nothing fancier than a square spiral trace antenna. While there is nothing magical about this design, the simplicity means that a host of other antennas can substitute for it. Simple magnet wire in loops could be used or the included PCB could be moved to a remote location but should probably use coaxial cable. Antenna (re)placement opens this device up to many DIY possibilities. 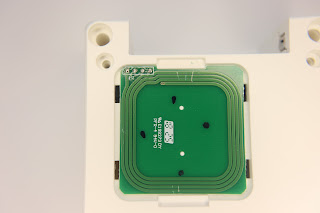 Antenna strength was tested with an NFC sensing business card. Right over the antenna, the indicating LED was intense as soon as it moved into range then dropped to low-power mode. It scanned a couple of times per second, but barely enough to show up in a picture. 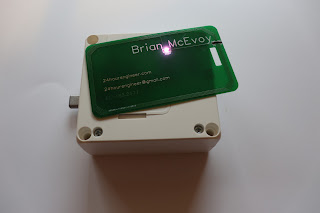 LED intensity over the antenna

The same card was tested on the back of the scanner which was opposite the antenna. The light was only visible immediately upon moving into range then faded. Both photos of the business card light were taken with the same camera settings. 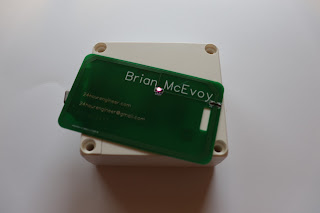 LED intensity on the far side of the device

As a test, Rothult was programmed to recognize the VivoKey spark in the back of my left hand. The antenna had to be right on the back of my hand, and it didn't scan quickly. When the xNT tag was read, there was a warning beep. For implant compatibility, the antenna would have to be very close to the surface or exposed.