April 20, 2019
It should not have been evident to viewers, but HaD recently migrated sites, and I was left unaware that my article about this Arduboy had been accepted and then published. The tip came while I was chatting with c00p3r of the Dangerous Minds Podcast. The creation was a playable Arduboy that was made on a flexible substrate with capacitive buttons. That meant no moving parts, thin as a sneeze, flexible, and almost unplayable. It was still high on the NEATO factor. 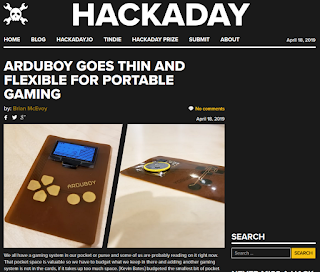 Progress on the Electronic Wind Chimes progressed as quickly as ever. All of the inputs were connected all the way to the controller so they could be monitored by the software. This made it easy to figure out where all the wires were going and assign pins according to where they were wired, even though that did not always agree with the plans. 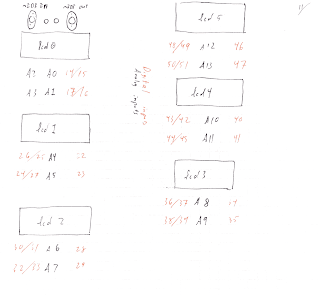 Carrying the plastic case around delicately and gingerly setting it down became tedious, so an enclosure was made with a handy sheet of plastic, some wood screws and a bunch of LEGO blocks. Despite the asymmetry, this case took a while to build. 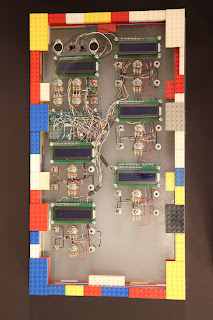 The software in the controller was added to show the number of the digital pin being pressed, the clear itself when the button was released. This was important because the code had to be able to act on rising and falling edges, but not be bothered when there were no changes.

Analog inputs were next, and they had problems. This time, the issues were not in the code, but the hardware. Potentiometers were replaced if they output unreliable signals. Three pots were thrown away to substitute working hardware and others changed which pins they used when the first set failed. 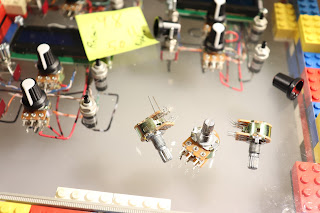 Once the analog and digital signals were talking nicely, the screens had to get in on the action. Rising and falling edges for switches and buttons was relatively easy, but getting the code to "rest" when nothing was happening with the potentiometers was not so simple. A jitter factor was added which ignored slight changes with the analog signals. It took a little trial-and-error to find the smallest number which would allow fine control but ignore tiny blips. 0.5% was the sweet spot (5/1024).


(0:48) Analog and digital sharing one screen