April 23, 2019
Up to now, notes were started and stopped in simple order:
This process did not scale well when it became necessary to play the same note from different channels and especially not when playing a one with a sustain longer than the time between two. A multi-dimension array was created which would hold the notes along with its velocity, activation time, duration, and channel. Each cycle, the array would be scanned for anything that should be activated. At that point, the velocity would be written to zero and the new activation time would have the duration added to it. The next time it came around, the zero velocity would tell the synth to turn off the note. It might not be the most elegant solution, but it was a place to start.

For this array to work, some of the variables from the first module had to be collected from both analog inputs and the two-way switches. Only one module was being considered, and once it is usable, the code will extend to the rest of the modules and for this reason, was written to be transplanted. 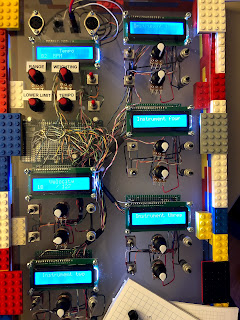 The electrical connections were already tested, and input recognition had been done a few times before in this project. It became possible to change instruments, pitch offset, time offset, and velocity. Each module would have a dedicated channel, so that did not need to be adjustable.

Typically, it is best to work off the problems one at a time, but implementing the multidimensional array meant that a lot of work had to be done before any testing could take place. New issues came up such as notes that would get cut off, and some notes would stick when changing instruments. There was not enough time to fix them before stopping for the night. 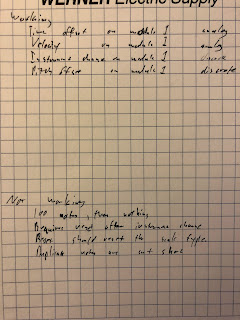