May 01, 2019
Keeping with the original building intention, the optocoupler circuit was moved to the controller's prototyping board. There was ample room and clearance between the the board and controller board was not an issue. The devices could have gone on the other side of the board if there was a size issue, but it was hard to reach through all the wires. 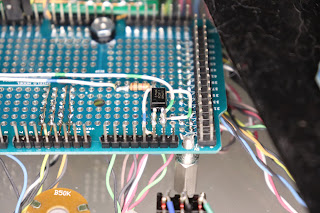 Optocoupler on the controller board

An LED across the headphone electrodes lit up at every expected note, so the signal was good. With this in mind, the MIDI signal was run directly to the Arduino pins. This lacked electrical protection. 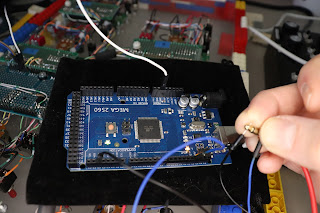 Arduino's SerialPassthrough sketch was modified to display incoming MIDI data. The lines were divided by recognizing that 255 (B11111111) often appeared, so that was assumed to be the start or end of a new note. Notes were being sent from the old version of this project since it regularly sent out random notes, even if they were not easy to control. 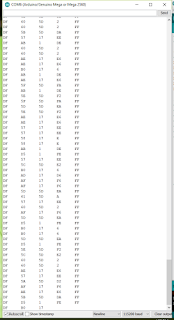 Serial data as seen by the controller

As soon as the Arduino reconnected with the prototyping board, all manner of nonsense came through the serial port and not even at the same rate as before. The data signal looked compromised by proximity to other connections. A pull-up resistor was installed to try to counteract this noise. 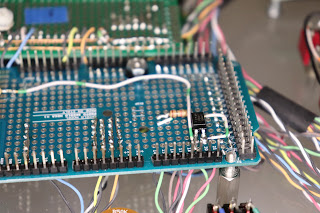 The resistor did nothing to calm the garbage data, so the Arduino was removed. Jumpers were reconnected and the incoming signal looked clean again. It seemed like the Arduino had an issue with being plugged onto the protoyping board. 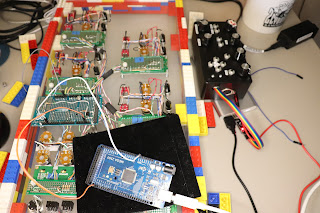 Receiving a signal through jumpers

Resistance at the suspicious points was measured and a short was found at the incoming and receiving pin for serial1. This explained the garbage data, which was the outgoing signal getting looped back into the receiving port. 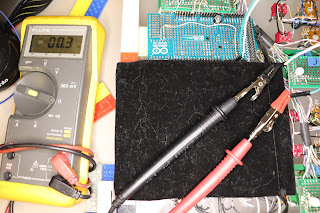