May 02, 2019
There was a known short between the serial data pins, and it was traced down to the junction board behind the screen. Macro lenses were added to the camera for a close-up shot. It was a small whisker of solder but enough to cause trouble. 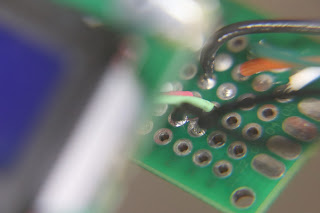 A dental pick was used to scrape away the solder bridge. It was probably formed when the board was facing down, and the data wires were attached and reattached. 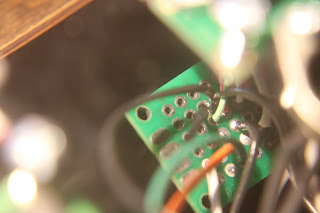 Scraping away the solder short

The old version of this project was used for generating notes, and it had two ports, so it was possible to monitor the MIDI notes with a commercial adapter while nearly simultaneously seeing them repeated by the Arduino. The two monitoring windows appear side-by-side in the picture below but the Arduino monitor, in white, inserts new data at the bottom while the MIDI monitor, in black, shows new data at the top 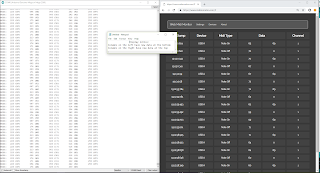 Data seen by Arduino and data from MIDI to USB converter

Data appeared in both windows at the same time, and it was clear the signals were from the same source. The Arduino program still did not show meaningful numbers, as evidenced by the above screenshot. Output was modified to display hexadecimal and bits. The old hardware's software was altered so it would output MIDI notes from 1 to 100, in order, then stop. A predictable pattern should be easier to spot. Hexadecimal was confusing, but when the individual bits were investigated, the first three bits (the note number) were counting up except the bits were all inverted! 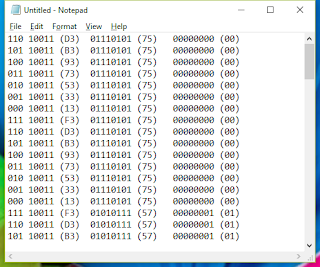 At this point, the optocoupler had been removed from the system. I didn't understand the exact purpose was until I saw the inverted bits. The optocoupler served two purposes. The first purpose was to isolate the controller from potentially dangerous outside voltage and the second was to act as a NOT gate. A NOT gate is also known as an inverter. Clearly, the builder of decades worth of MIDI hardware knew better than I, and this was a nutritious reminder.