May 06, 2019
Syncing a beat to music is vital, something I learned later than most. It was easy to find a drum beat on YouTube, and that worked all right for a couple of minutes until my notes drifted. Now, the soundtrack sounded like two separate tracks playing at the same time. A few minutes later, they drifted back into sync, and it was harmonious. At least, as much as a simple drum loop and prandom notes can be.

Allowing the notes to diverge was not going to work if the "music" would play without constant supervision. A drum machine might work so long as it used MIDI that was not USB, but they would have a learning curve and provide a lot of features not necessary for this project. The more thought that went into this, the more it seemed clear that building a rudimentary drum machine was the right thing to do. Learning about loops by making, rather than buying, would be more valuable. The project would not be feature-rich, compared to commercial versions, but it would also operate precisely the way I thought it should, which could diverge from the professional versions.

Enough background
----------
One goal of this project was to build it quickly since only one was needed and there were much better versions already available. Stocked parts were selected. One new component was a screw-terminal breakout board for the Arduino NANO. Instead of soldering to the controller board itself, this would allow wires to connect with just a screwdriver, and they could be moved later if necessary. The controller could also be swapped out in a few seconds.
BOM: 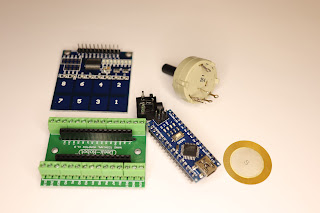 The pressure-sensing instruments I have seen before place a piezo element below the button or pad being pressed or struck. For this project, a single element went under all the buttons which will make simultaneous presses occur at the same pressure. If it even works. 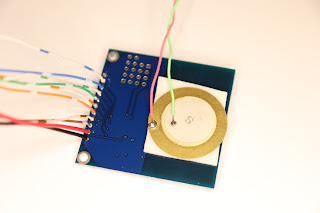 Capacitive sensing board and piezo element on the back

Two pieces of double-sided tape held the piezo element to the capacitive sensing board, and those were going to adhere to the enclosure. The padding from the tape may hinder the readings, but it could also dampen unwanted readings. 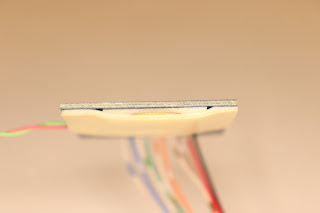 Wires between the capacitive button board and NANO were stiffer than desirable. Solid cores and oversized power conductors were not smart planning. 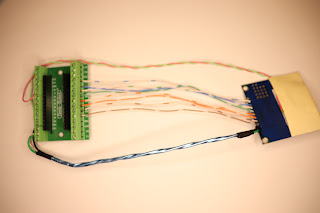 A chassis mount headphone socket was going to be the MIDI output for this project, but it was dissimilar from the ones used before, so the terminals had to be figured out. A continuity meter and a headphone cable on the old project showed which terminals needed to be connected on this. Strangely, the signal goes to the sleeve of the headphone which would cause a short if the socket was mounted in a grounded metal enclosure. 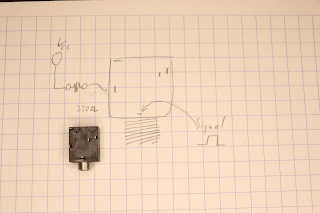 The switch was connected, and shrink tube was added to the terminals. The controller ran out of digital inputs, so one of the spare analog inputs was used. 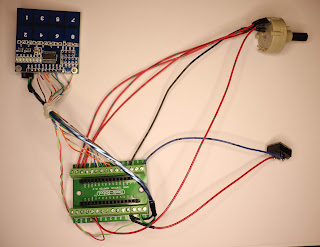 A miniature lunchbox-style case came from stocked parts. Sheet metal is a reliable material for mounting electronics because it is thin, easy to drill, and blocks RF, but in this case, it also means that all the connections, even ground, must be isolated or could cause a short to the MIDI signal. 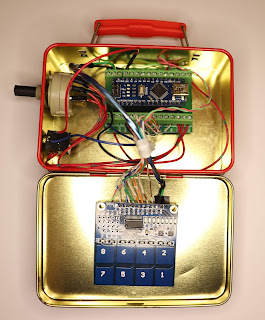