May 17, 2019
MIDI↔USB adapters tested the hardware, but they indicated that all the devices were outputting reliable signals. Granted, since it was a mature protocol, there could be some error correction built into the adapters for when they have to interface with cheap MIDI toys. An oscilloscope allowed me to look at the waveforms directly. The signal from the first version served as the starting point since it had usable output MIDI longer than anything in this project. 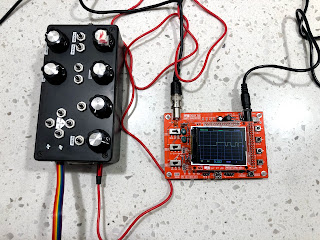 Measuring data from the old EWC

It was not necessary to decode the output on the oscilloscope yet, the vital thing was to see that the signals were not wildly different. MIDI from the Little Drummer Bot looked similar in terms of how long the pulses lasted, but there seemed to be more oscillations. 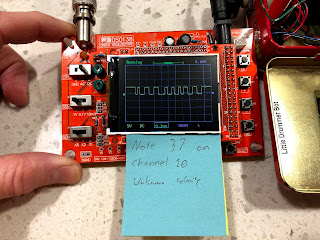 An Arduino Mini Pro received programming to output the kick drum at a known velocity for comparison with the Little Drummer Bot. On screen, they seemed to be the same, even though the bare Arduino used the ground as a reference while the drum machine used Vcc as a reference. This can be seen in the pictures because the Mini Pro trace starts and ends above the 0V line. 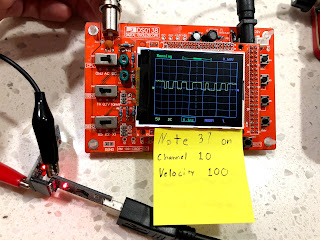 Measuring note 37 from a barebones sketch

Nothing in the code seemed suspicious, so all the extra hardware was removed. The bare Arduino transmit pin connected right to the receiving pin of the Arduino MEGA and MIDI was sent across at full speed. For once, it worked! My best hypothesis was that the optocouplers were too slow to keep up with 31,250 bits per second, but 18,000 was under the threshold. New optocouplers were ordered,, but it may be safe to tap right onto the data pins. 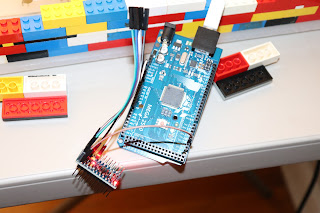 This proved the trouble with data transmission and reception was not the fault of the Little Drummer Bot so LittleDB is complete!