June 14, 2019
Kombucha is a vinegary drink made from fermented tea. Scoby is a colony of yeast and bacteria that ferments the tea. Depending on what you are after, your product/byproduct view may be opposite someone else, or you can harvest both for different reasons.

Years ago, I watched Justin Atkin's video about making vegan "leather" from kombucha scoby. My old roommate talked about how it might be fun to make kombucha. At Grindfest 2019, someone talked about their continuing adventures making and harvesting scoby. They even showed me a wallet they made from it. That was the tipping point. Talking face-to-face with an expert and asking many novice questions prompted me to start my batch. They also recommended Justin's video and a TED Talk about a clothing designer.

Of course, I wanted to try a few different things all at once, write it down, and take notes. This was a science experiment.

The USA still uses cups and gallons for measuring and selling ingredients. Sorry about that.
1 cup = 240 milliliters
1 gallon = 3.8 liters

Everyone said that city tap water was toxic to growing kombucha, so the first recipes used filtered water. A large stock pot held and boiled four gallons (fifteen liters) of bottled water. Heating took a long time on high heat. It also turns out that you need a fast shutter speed to capture steam and a slow shutter will ignore the steam. 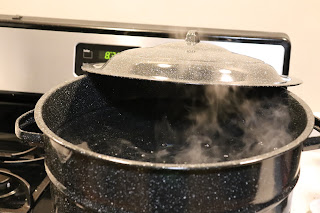 Kombucha was traditionally made with green or black tea, and I happened to have bagless Irish Breakfast on hand. Good stuff too. I used twenty tea bags in four gallons (four bags for every three liters) of hot water. 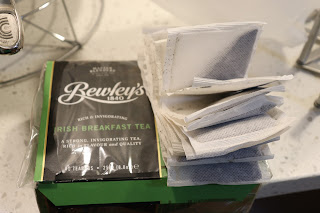 Black tea bags with no strings

The recipes I followed recommended following the instructions on the tea, but I steeped it a lot longer. Like fifteen minutes rather than four. In the end, this made very dark tea. This was not an accident, I wanted strong tea. 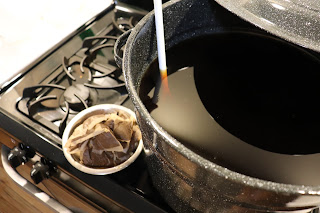 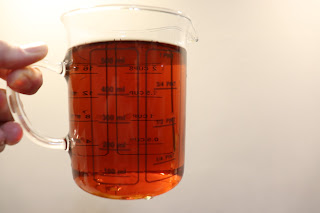 A couple cups of dark tea

Kombucha starter kits were available online but a kombucha maker in Madison, Wisconsin sells their bottles with a slice of scoby in every bottle, so I wanted to try this inexpensive starter and compare it to one of the kits. The kit would be the control in this experiment. 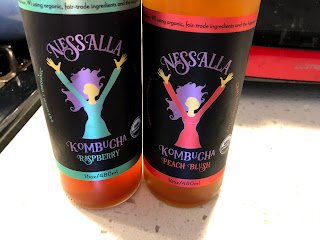 Nessalla includes scoby in each bottle

All the strong tea was divided into four plastic bins after they were washed and rinsed. A cup (240mL) of sugar and 1/4 cup (60mL) of boiling water was mixed into the lukewarm tea. The commercial kombucha kit was prepared according to directions, including steeping the tea for the recommended time. 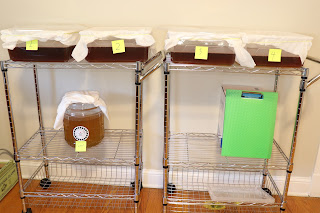 Everything set up to make kombucha


Each of the four bins had a different combination of ingredients added to the sweet tea.
Recipe one:
Recipe two:
Recipe three:
Recipe four: 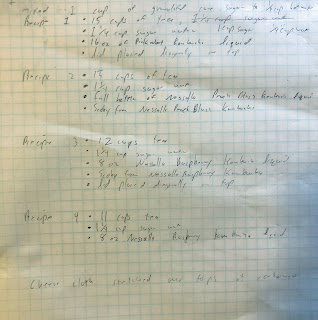