June 16, 2019
I put thermometers on the bottom of each bin to monitor their temperatures. They were nothing fancier than stick-on brewing thermometers and the same kind included with the kit. 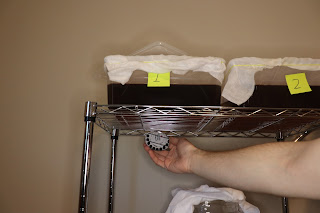 Looking at a thermometer with a mirror

Kombucha is not a very exothermic or endothermic experiment, so all the thermometers were measuring the temperature of the room as mitigated by the tea.

After four days, there was visible growth in four of five of the containers. Bins two, three, and four show white spots on the surface. Bin one, which didn't have any scoby, doesn't show any growth. 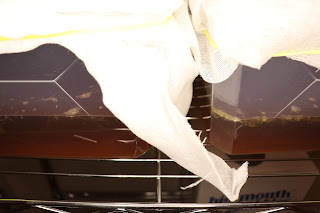 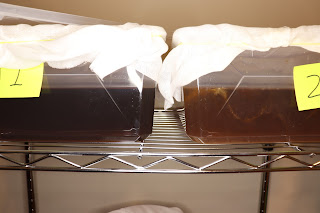 Day four, bins one and two

Growth in all the bins continued on the fifth day. The close-up of container two is similar to three and four. Bin one doesn't show anything. 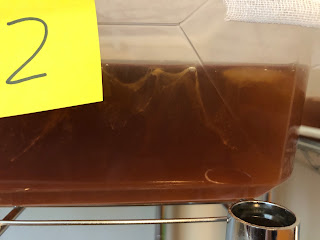 ----- Two-week mark-----
Two weeks after combining scoby and sweet tea, the bins smelled heavily of vinegar and tasted strong. In the photo below, the liquid level of each vessel is wildly different. The hypothesis is that proximity to a doorway, near number four, allowed for more airflow and promoted faster scoby growth. Number two was the sweetest, most flavorful, while number four had a stronger vinegar taste. 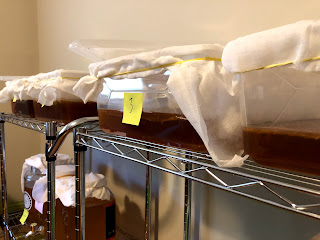 Recipe one, farthest from the door, was too sweet to collect, so it was left to process more. This was also the last to develop a visible scoby. Recipe two had a respectable layer on top, and number four was visibly the thickest. On top of the kit, a different looking scoby had formed. Instead of the bubbly layer, the color of dark tea, it was smooth and white. Also worth noting, this was unlike the scoby mother included with the kit. The tea in the kit was still sweet, so I consider this unsafe, and I questioned what was growing in that vessel. Anyone who knows is invited to comment below.

The scoby from bins three and four were harvested to dry them and try making vegan leather while number two's scoby was cycled back into another recipe. 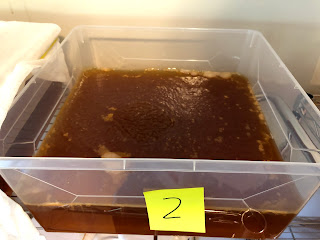 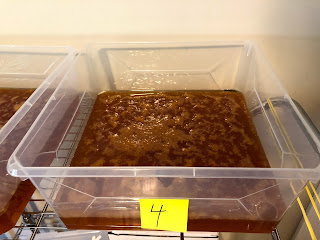 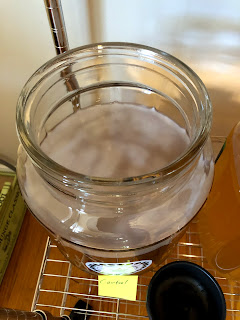 Scoby from the kit recipe 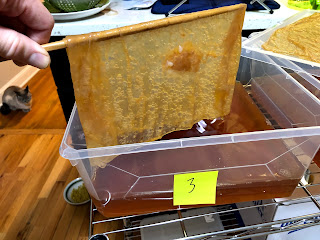 Scoby being lifted out

Scoby drying was done on the container lids since they were the same size as the culture and handy. This was equally as exciting as having a refrigerator full of kombucha. 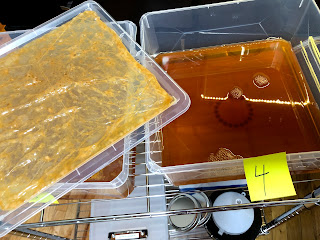 Harvested kombucha was put into any available container. Some was poured through a jelly strainer, and some was filtered with a coffee filter. 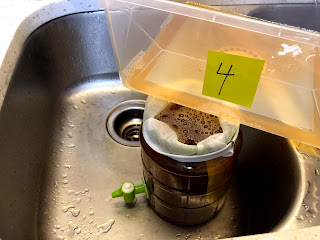 The scoby smelled pretty bad while it was drying. I thought a batch of kombucha had gotten mold, but it was the drying process. Perhaps I should have bleached it beforehand or placed it outside my apartment. Either way, it was too thin to be useful. It should have been used for a few more batches of kombucha. 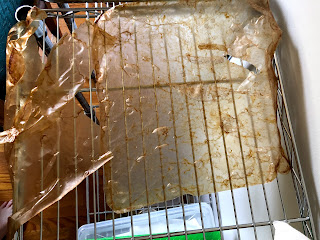 
This was a fun recipe disguised as science. I discovered some of the necessities for harvesting scoby and kombucha. My weak sense of taste LOVED the strong vinegar flavor, and I enjoyed mixing it with fruit juices and root beer. Mix one part vinegary kombucha to two parts sweet root beer. I used Faygo root beer.