June 18, 2019
I swore I would not work with acrylic after making the face of my Electronic Wind Chimes from the stuff. Sadly, I cannot let raw material go to waste, and this was to be an early prototype so ill-wrought holes and corners were acceptable losses in the way of getting something built quickly. That said, I despise working with acrylic so much.

Two pieces of scrap acrylic sheet were scored and snapped to size. A segment of addressable LED strip was measured so that an evenly spaced grid could be arranged from the LEDs even though each LED's portion of the strip was longer than it was wide. The LED strip was 10mm across and 16mm wide. To accommodate the dimensions, guidelines were drawn on the acrylic so the strips could be appropriately placed. 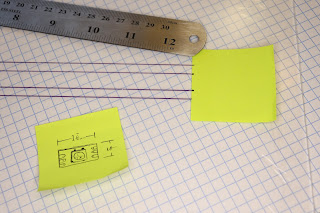 Four holes were drilled in the corners of each acrylic piece so four bolts could fasten there. In the bottom segment, where the LEDs were mounted, the bolts were held in place with a nut. The other piece of plastic would be able to adjust on the threads to find the optimal distance once the LEDs were programmed. 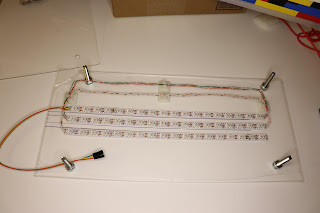 Nine of the LEDs received 30-degree focusing lenses in the hope that they would provide a cleaner projection when the light was shone onto a screen. Experimental programming would test the differences between the lensed and bare LEDs. 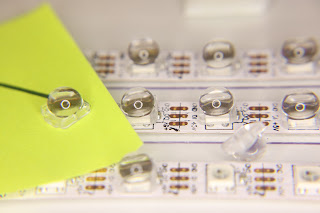 Lenses on the nine centermost LEDs