June 19, 2019
Testing addressable LEDs required a program, and I made a list of all the things I wanted to test, and I had a solid idea of how to experiment with everything. Most of the time, it was a simple matter of turning on the bare LEDs OR the lensed LEDs with different colors.

The test programming could have used a single button, but it was easy enough to use two buttons. Nine different tests were outlined, and each test had at least two states. One button would change the test being performed, and the second button incremented the state of the test. 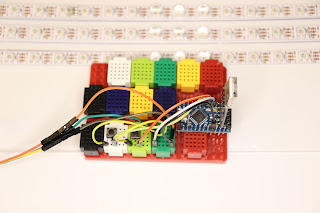 The first test was to simultaneously turn on the first LED in each strip as a single color, and the second button would increment which light was on by going down the line. This way, the bare LEDs could be on for a bit then switched to the lensed LEDs to see which looked better. The next three tests were the same routine but used different colors and white. The light from the lights with lenses appeared cleaner, but the diffused light filled in the white paper more fully. 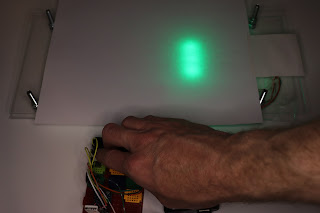 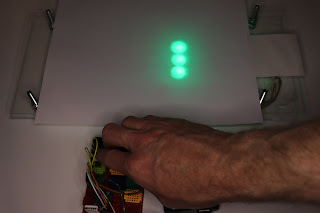 Another test turned on all the lensed lights OR the bare ones and swapped each time the function button was pressed. This was similar to the first tests but easier to compare adjacent LEDs by quickly toggling them.

The final test was to assign every light a prandom color, red, green, or blue and reshuffle each time the function button was changed.

I assumed I would have to suspend the paper an inch (25mm) away from the lights when using lenses, but it was closer to 1/2" (12mm), so this testing was informative. 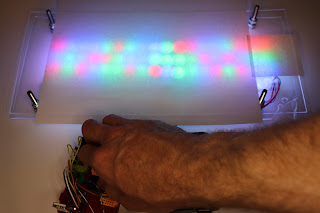