July 06, 2019
A big portion of the week revolved around picking motors for the project. The first one was a stepper motor from a surplus store. I had a dual H-bridge in stock, but the controller I connected refused to work. One night was spent struggling with the broken controller. 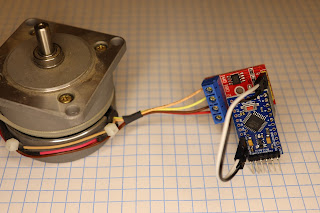 A known-good controller stepped in and got the motor spinning. There wasn't much power behind the shaft, so a larger H-bridge was connected, but that one refused to spin at all.

The first motor to work without a lot of fuss and enough power was a DC motor with a gearbox, which was also from the surplus store. The H-bridge had to use a different Arduino program, but that was a simple matter. Even though the motor could drive the cylinder without much trouble, it was only driving the practice version, and the final version would be more massive. Plans for a second motor running in parallel were devised, and a sketch was made of how to connect a couple of motors. 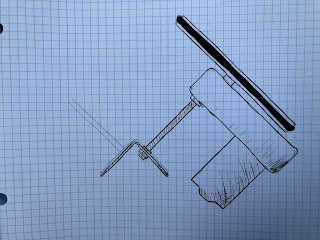 Sketch for half a motor mount and motors

Some parts had to be purchased to construct the twin motor configuration including long 10-32 bolts and a second motor. The rest of the parts were already stocked. The trick was to attach the motors at 45° from the base so that they would be 90° from each other which meant that a right-angle bracket would do the trick. 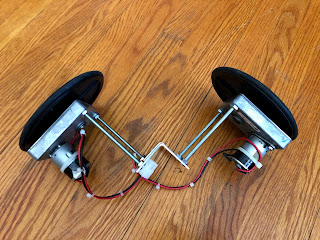 Attaching a right-angle bracket at 45° from a level surface meant a triangular mounting block which was taken off the corner of a 2x4 piece of lumber. After the mount was constructed and clearances were adjusted, the motors were powered, and the cylinder rotated nicely.

DC motors use a configuration of a commutator and brushes to transfer power. Motor "brushes" are often graphite rods, and a commutator reverses polarity as the motor spins. The parts I built are a slip ring but use a literal brush. The foam brush provided tension between copper strips on the PVC and brush and worked well enough to supply power to some LEDs inside the cylinder while it rotated. 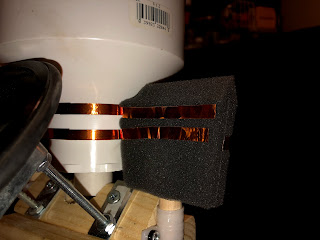