July 13, 2019
Each time I post an article for Hackaday, I check to make sure it hasn’t been written about before. Somehow, I missed this one and wrote a second time. One person pointed it out, and another replied that it was worth seeing again. I was relieved it did not turn ugly. Perhaps the people interested in LED jewelry are not the ones who get upset over accidental double-posting. 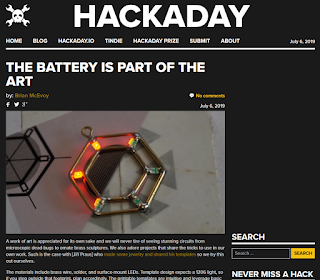 The Battery is Part of the Art

I learned that addressable 7-segment displays exist. That was exciting, and I ordered some immediately, even though I don’t have a need yet. I used this article to talk about how the things we build demonstrate what we’re passionate about, and this person used his YouTube statistics to motivate himself. 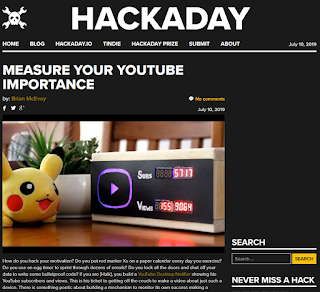 The PillarGame project was back to using lights. This time they were used to prove that power was getting inside a rotating tube from the outside. A slip ring configuration was built onto the PVC cylinder, and non-addressable LED strips on the inside were visible in the dark while it spun.

LED with power and lights inside

A hole was cut in the side of the PVC to pass the LED strips through. A long slot allowed the rest to tuck wires inside, but it could have been done more neatly without the long gash. This method will not be used in the final version since the lights will trace a helix. 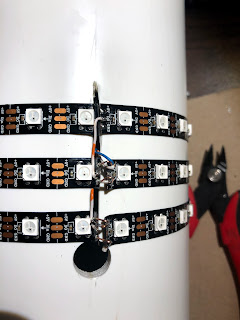 A microcontroller inside the PVC will operate the LED strips, but it will have to receive data wirelessly. All of the game logic will happen outside the cylinder. Some 433MHz radios were in stock, and I wanted to learn how to use them. I hoped they would be simple enough to simply swap into the circuit and act as though the LEDs were connected to the board like before. This might have worked, but the baud rate of the lights was higher than the radios could support. 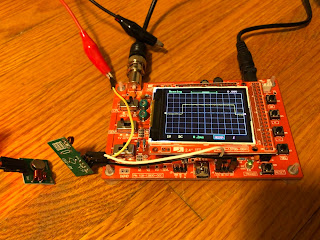 Insufficient bandwidth on these radios

The next wireless experiment was some inexpensive 2.4GHz modules I also had in my stocked parts. I knew they were not as simple as the 433MHz radios, so I tried them next. Before I could even get the radios working, I had trouble with an Arduino-compatible board which was not giving me the expected serial output. It turned out that this was my fault, not the hardware. 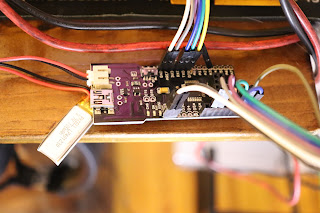 Battery would not fix problematic output