July 20, 2019
When I was looking at a lot of MIDI projects for reference and help, I came across some awesome finished projects, like this one. The clean arrays of buttons and lights were eye-catching and a feat of programming and wiring. 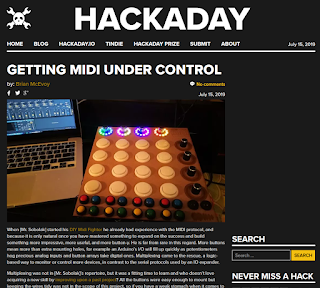 Getting MIDI Under Control

Wireless communication trials continued. I was able to send textual messages across my apartment with 2.4GHz modules on a couple of Arduinos. The message appeared on the screen when I touched the wire to the controller in the foreground.

I kept moving forward with the 2.4GHz modules, but I was unable to write code that would transmit and receive variables. The only thing I could transfer was character strings. Even then, some of the seemingly inconsequential changes appeared to break down all communication. 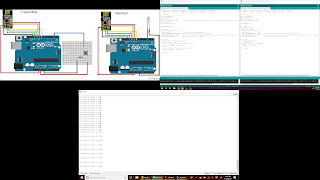 Screenshot of how two modules should talk

Transmission and reception became increasingly difficult to predict, and usable code seemed to be a gamble based on when I uploaded more than what was programmed. I suspected that I was getting interference from nearby electronics. 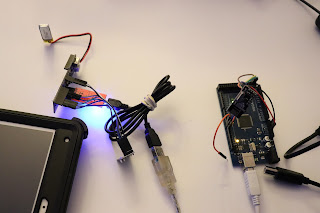 A hypothesis was that the code was not to blame, but the hardware, so the radios were placed near and far from possible interference sources, such as an iPad with Bluetooth and Wifi active. Both of those protocols were 2.4GHz in this case. The hypothesis was not thoroughly tested to give a concrete answer, but the conclusion was that the simple 2.4GHz modules were not reliable enough for this project. 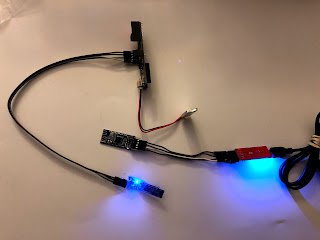 No one wanted to talk

My next attempt was with Bluetooth modules. While these still operate in the 2.4GHz range, they will filter out unwanted interference, and the transmitter and receiver will lock onto one another's channel to maintain the connection. I intended to use the Bluetooth radio in a Raspberry Pi 0W to connect with a module, but I wanted to start with the Windows serial port software I was familiar with. I was only able to establish a wireless connection with my phone, never a desktop OS. 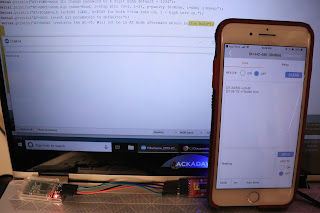 The phone would connect just fine