July 27, 2019
I continued trying to get a Bluetooth module to connect to a Raspberry Pi wirelessly, and I continued to fail. My hopes were finally dashed when I read about a Python script which would take care of some of the work, but the posted code was incomplete, and there was not enough to fill in the blanks. 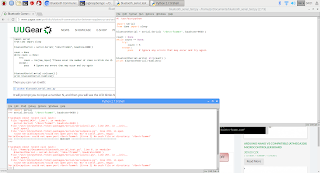 Attempt to communicate from computer to Bluetooth module

The more I looked, the more it became clear that talking from the onboard Bluetooth chip to a remote module was not welcome, and a second Bluetooth module was necessary. That second unit would also have to connect through a USB↔serial board. Of the three boards I had, two seemed amenable to bridging. 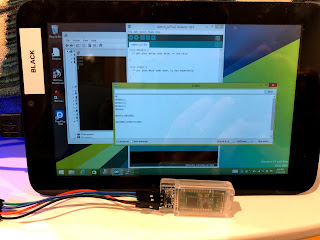 The two functioning modules were counterfeits, and the one that refused to cooperate appeared to be genuine. Using forged units made it challenging to collect documentation and commands were similar, but without a reliable list of commands, it was hard to know if a module could act as a central or peripheral unit. One was useful enough to print a HELP menu listing all it was capable of doing. 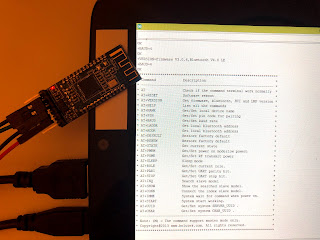 The least helpful module accepted a remote connection, and it could relay data sent to it through a wired serial adapter, but it would not send any data back so I thought it might be a broken Tx pin. A magnifying glass showed a good solder joint, but it was heated, and solder was added. The problem did not disappear. 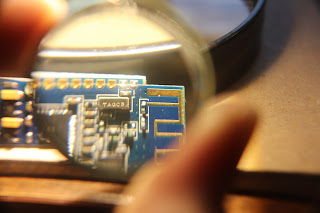 Inside the cylinder, there would have to be a controller, and for reliability's sake, it should have a battery to keep it one with unreliable power. For testing, a couple of LEDs were plugged directly into IO pins where one pin was set to LOW, and the other pin controlled the light. This wastes an IO point but saves the time of doing it right. 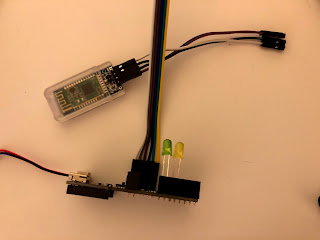 Setup for testing and programming the peripheral module

Programming started on the peripheral module. The first step was recognizing when the Bluetooth module was connected by sending a command and listening for the expected response. Once the answer came through, a light would turn on. This was important since I had never had to recognize and handle UART serial commands before.

Progam confirming the module was connected