August 01, 2019
Eliminating memory problems became a priority. I tried dividing the LEDs into three different strips, so the memory would not have to be assigned in a single array. This also helped with the division of rows since the top, bottom, and middle rows were separate entities. Nothing changed with the redistribution of LEDs and three strips of 300 overloaded the memory. Fortunately, while testing the different lines, I found that it was possible to remove power from the LEDs and calling a show() command restored all the colors, so there was no need to keep an extra register with those numbers.

A few special functions were written to test communication. It was possible to assign LEDs a unique color one at a time, but turning on each LED was laborious. A test() function was written which turned on the first eight lights on all three rows, then changed their colors and left them on. The next task was AllOff() which turned off all of the LEDs and SlowOff() which turned them off sequentially. A show() function refreshed all three rows and could be useful after losing power. Some of the algorithms had delays programmed into them and talking to 900 addresses slowed things downs, so feedback was added, which sent a message about starting a long process and a message when it was complete. During these operations, the onboard indicator showing connection would turn off until completion. 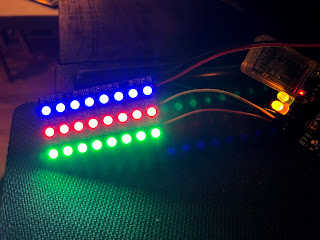