August 03, 2019
Deciphering integers and characters one at a time is hard enough, but since I wanted to use both, it made sense to process both at the same time and extract the parts I wanted. For now, everything came through as characters since it was being sent from the Arduino serial monitor or PuTTY but eventually, some parts of the message will be integers. 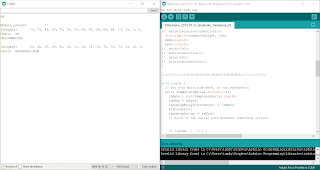 Chars and ints at the same time

A protocol was started, which made it possible to control a single LED via the Bluetooth bridge. Sending commands one at a time by typing a command and hitting send was laborious, but automating it will make it much smoother.

The power to the LEDs won't be entirely reliable, so saving each of the colors would be critical when the strip loses power. A sizable array was created to record the red, green, and blue values for each of the nine-hundred lights. This broke the code. 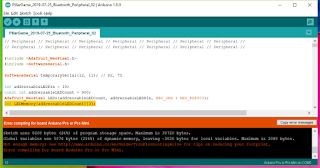 I tried to break out the LEDs into three strips. My thought was that nine-hundred was just too much for a single array and the NeoPixel library choked on it, but a few instances of three-hundred would be all right. This didn't fix the problem, but I liked the simplicity of three strips instead of trying to connect all the LEDs in series. 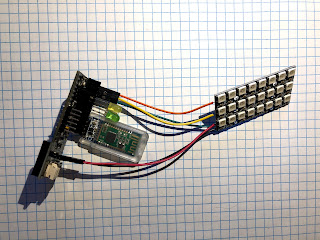 The code finally ran again when I reduced the total number of lights. The NeoPixel library wasn't choking, it was the controller starved for memory. There was no warning from the compiler that anything was wrong, but it seems that an Atmega328P is not up to the task of handling more than 450 LEDs.

A new controller, with more memory, was suddenly the most important thing to do. I started with an Adafruit M0 Bluefruit LE in the hope that the onboard BLE radio would provide a clean solution along with the battery charging circuit. It did not. I bought a second M0 Feather, and it will require the old Bluetooth module, but that code is already developing. 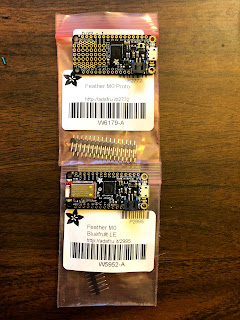