August 31, 2019
I have not written many long-form articles for Hackaday, but I was proud of this one regarding PegLeg since it was created by people I know. The project was about two Raspberry Pi 0 Ws implanted into the creators’ legs. The software was PirateBox, a mesh-networking server which does not require internet access but creates its own local network and can daisy-chain for inter-connectivity. 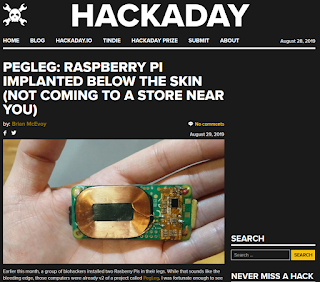 Pegleg: Raspberry Pi Implanted Below the Skin (Not Coming to a Store Near You)

Electrical work at the top of the base continued including a newly installed Arduino Mega, and USB power port and the H-bridge was mounted. Before, the H-bridge was suspended in place by the wires off the motors. 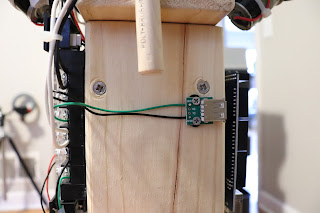 USB was one upgrade to the base

A light/dark sensor was going to be installed to act as a position reader or encoder sensor. Often, sensors to detect position are attached to the motor and thousands of revolutions may be recorded before a single revolution of the intended mass. In this case, the DC motors could spin a hundred times before the pillar advances the number of degrees between two adjacent lights. This would yield higher resolution, but it would be unreliable if the motors slipped, for which I was planning. 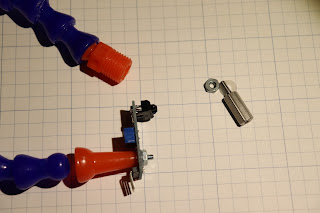 The encoder attached to the pillar was a length of decorative tape from the craft store. It was a matte finish with slanted black and white bars. I wanted to find vertical bars, but it was no trouble to angle the sensor to match the incline of the bars. 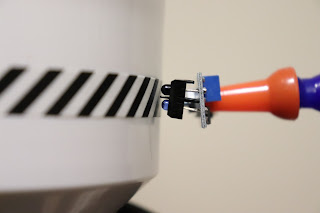 Placing the encoder on the pillar itself lowered the resolution but improved the reliability, so I considered it a favorable trade-off between precision and accuracy. I did not trust the encoder to keep perfect track, so I wanted to add a home sensor that only triggered when the pillar was in a specific position. To do this, I would use a magnet and a couple of reed switches which close in the presence of magnetic fields. The switches I had in stock were fragile, so I encased a couple of them in glue to keep them safe. 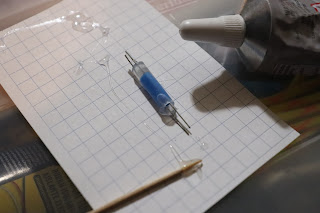 The goal for this project is to make a display, probably a clock, which can relate rotational movement to the displayed information. In other words, numbers displayed on the LEDs could seemingly drift downward while the pillar spins, so the digits appear horizontally stationary. By the end, it will also be the hardware for a hackathon where a game will be programmed into it. It will be vital to fit all the LEDs on to a tall pillar with light strips curling around it, and the team’s designer spaced the helix at 100mm. The team meeting was productive and introduced some of the members for the first time. 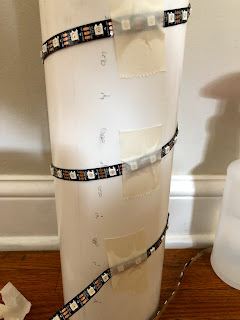