September 07, 2019
When a new microcontroller was connected to the motor controller, I wanted to instruct it with physical pushbuttons instead of serial commands, at least to start. Three buttons were arranged on a ModuKey PCB. I wanted to have buttons for “Jog Left,” “Jog Right,” and “Home.” The wire was some bulk cord from the surplus store. 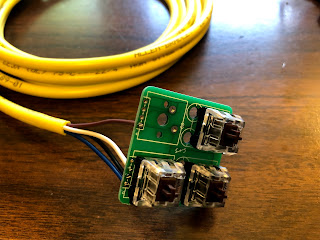 The magnet switch I started last week was cured, but the adhesive was covering two of the leads, and it was challenging to remove. Finally, I blasted it with a flame and baked off the unwanted glue. This switch would become the switch that closes when it reaches the HOME position. This will be marked by a stack of magnets on the pillar so when it rotates the magnets close to the switch, it will alert the microcontroller. 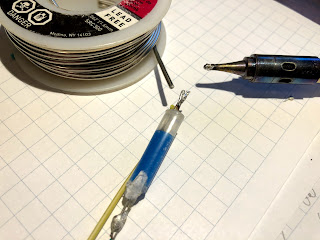 Knowing the HOME position is essential for getting accurate location information, but it will be vital to know which direction the cylinder faces at any time. A light-dark sensor and striped tape made an encoder built into the pillar. When the sensor changes state, I know the cylinder is rotating, and since I will know what direction based on the motors, I should be able to accurately determine its position.

Movement code borrowed a lot from the example code which operated an H-bridge. The home and encoder code were fresh. Jogging code merged with encoder counting to create location tracking. This was all done with sequentially functioning code, so nothing else could happen while the motor was moving. 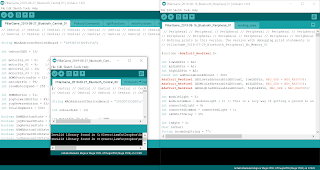 After the team determined the angle of the LEDs, I discovered that the existing cylinder was too short. A longer one was cut to the match the proposed size. 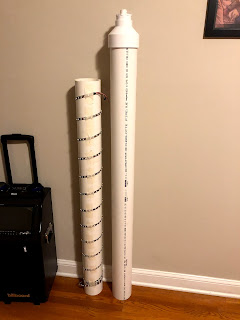 Another issue brought up by that team was that the base was exposed and while it could be covered to be more attractive, it was a tripping hazard. This conclusion evolved when I tripped over it. The outcome was a tabletop, so people would never try to step over it. I knew it would be crowded during the presentation, so I decided on an octagon top which I think fit the cylinder theme. 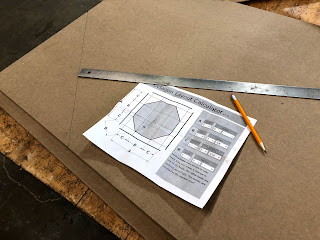