September 14, 2019
It was great fun tripping over the wooden base and regarding that space as wasted, but someone insisted that it deserved a tabletop. All of a sudden, I had a pretty cool table instead of a giant ugly base. Okay, it will become a neat table. Right now, it's a rough wooden chunk with an MDF top. 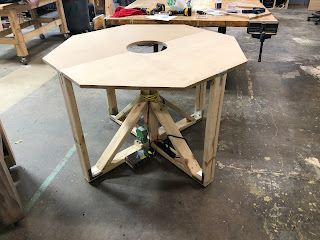 Tabletop to go with the pillar

Applying LED strips in a neat triple helix is twice as hard as it sounds and 1/10th as much fun as it sounds. The first strip needed to be almost perfect since the subsequent ones would follow its lead and it took all my patience for a day to get it right. The other two were not fun, but I had more practice and patience when I applied them. With all 900 LEDs attached, I naturally wanted to turn on some of them. I knew it would be a disaster, and I hypothesized that the sudden draw of all these lights would cause the system to fail and reset itself. Instead, a little battery struggled to keep every node producing a few photons. The ones at the closest end did not have an additional power drop, so they were the most starved for voltage. 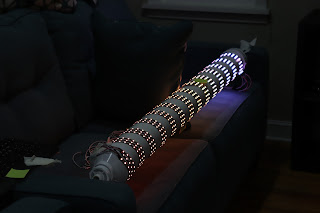 LEDs lit from a little battery at one end

I installed power drops every sixty nodes. I chose sixty because there were already solder joints at these points, but someone advised me that anything more than seventy was asking for trouble. I was using a butane soldering iron for the first time and marred the PVC a few times. I need to be mindful of the vent. 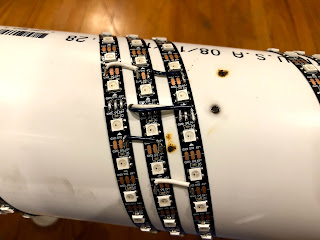 Bluetooth data was working. Power was in place. All the electrical factors were ready so I hung the tube from the ceiling, connected it to the power supply, and turned all the lights on. I was nervous about the thin wire I was using but there was no trouble as I ran function after function to turn lights on and off. 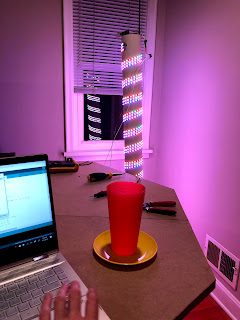 Hanging the pillar was never a long-term solution. I built a new base that was short enough that it cleared the ceiling but it did not have any motors. Someday, this will probably become a lamp base. I happen to find a PVC part that made it a simple task to mount a 4" segment to a flat surface, scrap MDF in this case. 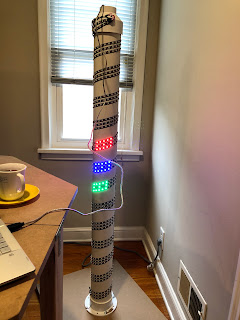 New base displaying some numbers