October 05, 2019
When I am at work, I occasionally have a repetitive task but enough spare time that I can tinker to find a better way. This time, I had a lot of black plastic wingnuts that I needed to remove and later replace. The solution used a 1/2" socket adapter, a medium paper binder, and a rubber band. It sounds like a MacGuyver supply list, and it was about that flimsy, but in a pinch, it worked. This could qualify as a losing time gamble since I lost time, but I kept my sanity by replacing a tedious task with a creative one. Ultimately, I think it was a win.

My makeshift tool for wingnuts

Old video games did not have much in the way of resources, so, in the case of this maze game, levels were generated on-the-fly. The light-weight algorithm that did the heavy lifting was a bit of a mystery. It created solvable mazes every time, but pseudo-random choices kept things fresh. The programmer reported that the reference table for the maze generating was written by a stoner and couldn't remember how he did it due to chemical impedance. 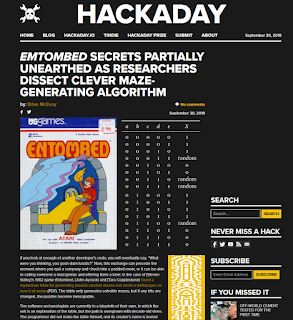 The PillarClock portion of the PillarGame project drew to a close. I made a short (1:12) video with narration to describe the form and function, while a time-lapse image showed smooth motor operation and digit display.

Months ago, I finished the first version of the Electronic Wind Chimes, but I never used it because it was cumbersome. Since it was sturdy, I wanted to mount it in a usable position and get some use out of it. I combined an old computer monitor stand and picture hanging hardware to make a vertical display. 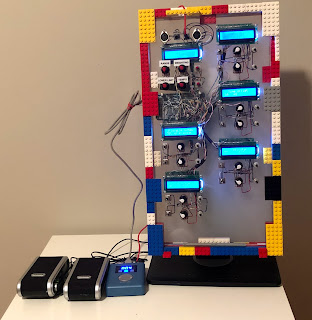 A new iteration of the Electronic Wind Chimes began with a significantly smaller footprint. Rather than an item with buttons, knobs, and displays, I went minimalist for a build with three buttons and two potentiometers. Instead of every factor of sound generation being under exact control, this would pseudo-randomly select those factors and since they could be generated anew with another button press, the user would just rely on luck to find a sound they wanted. Each press would be a gamble. 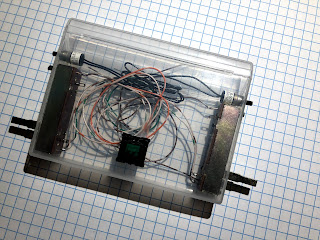 The container was a plastic chewing gum case with a hinged lid. Only one narrow openening was accessible so some of the wires had to be lengthy to reach a junction board. A processor and sound generating board would connect to the tidy wires of that board. 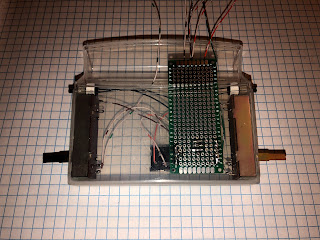