October 12, 2019
All the parts for the Electronic Wind Chimes Handheld, EWC_Handhled, came together physically and electrically. For a change, most of the pieces I purchased locally, but the battery and buttons were leftovers in my stock from previous projects. 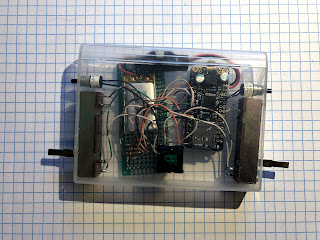 All hardware in place

I wrote a test program to check that all the inputs worked. I spent time finding short screws that could hold the potentiometers to the side and still permit the full range of travel, but it turned out that the extreme ends of the scale were not tracked. For example, if I moved the slider to the top, 5/6 of the way there, it reached peak value and stopped changing. The fortunate thing was that my maximum and minimum values read by the controller were stable. 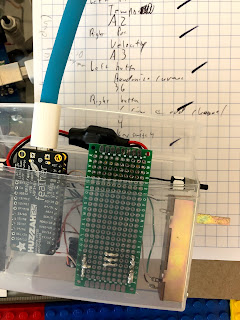 With working hardware, I migrated previous code so that I could play notes at pseudo-random and change the velocity and tempo. This migration needed to consider the different controllers and reduced inputs.

A new feature was adding a keyswitch to the bottom so the tempo could be set to its minimum, and a player could tap for a new note, and it would sustain when the button was released. Note selection was still pseudo-random.

So far, the device was programmed to play a single note at any time. By the end, this would need to play notes on fifteen channels, and that meant that the procedural method of releasing a note was then starting a new one needed to move to a model that scaled well. The revision changed it, so notes were added to an array, and a separate function scanned the array looking for notes that were ready to play or stop. The serial output showed that it worked.

Recognizable input played from an array

The two buttons near the top had purpose, unlike any used in previous Electronic Wind Chime models. One would prandomly change settings on the instrument such as pitch offset, chance to play, time offset, and duration. A serial monitor, shown below, displayed when a new set of parameters was generated. If both buttons were held simultaneously, the device would "panic" and systematically turn off all notes on all channels 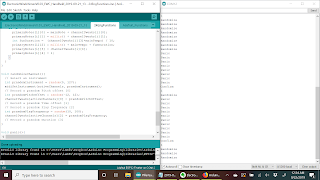