October 15, 2019
Added functionality of time offsets
Set up light tent
Recorded and narrated video in one go but multiple takes

The final hurdle in the programming was making time offsets functional. This was tricky because playing a note many cycles after the data had been generated, without bogging down other functions, required more planning than putting all the notes into an array. Notes still had to sustain themselves for a certain period so in addition to starting later, they had to keep playing when a new note was generated. In this case, the time offset would never let more than two notes play at a time so the array was doubled and each half takes turns.

This video would look cleaner since I bought a light tent for picturing small subjects. The tent was larger than I imagined when I bought it so it took more real estate but it came out nicely. 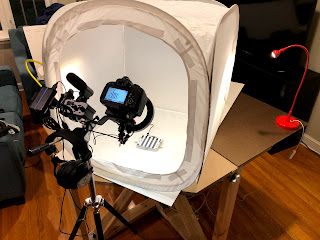 Narration was improvised instead of scripted and the microphone/mixer left a lot of static on the line so I apologize for that. In the end, the video was two-and-a-half minutes and demonstrates all the new functions in the EWC_Handheld.