October 31, 2019
Every year since 2014, I have participated in the IoTHackDay in St. Paul, Minnesota. This year, I built all of the hardware for the project, which I posted about on this blog. We wanted original equipment for the hack-a-thon, and I worked on it for five months beforehand, which turned out to be the right amount. We arrived with lightly-tested parts and an eager team. We also had the largest group at nine people. It was an effort to get everything into the workroom. 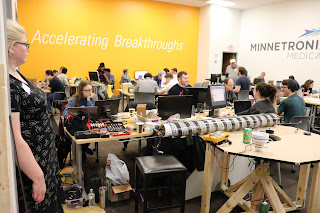 One half of the project room

One of the yearly traditions is starting a fire. This never happens on purpose, but it happens nonetheless. In this case, a wire was pinched inside the, pillar, which shorted out, melted some wires, sent up some smoke, and destroyed part of my slip ring. 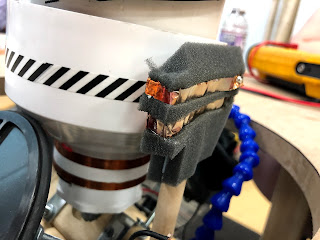 Getting the hardware running was a lot of work. I had hoped to work on other parts of the project during the day, but, as I predicted, my time was always spent maintaining the table and pillar. 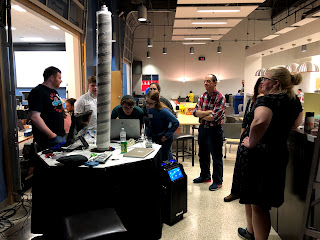 Anxiously waiting to a fantastictest code

One question I wanted to answer was how much power the pillar consumed at full brightness. My calculations were based on 0.26W per light, and with 900 LEDs, I came to 46.8A for all three light strips. My measurement showed that 11.5A to 11.8A was going from the power supply to the pillar. This was good news for wire sizing and power, transfer, and it meant that my power supply was overbuilt for the purpose. I could have gotten by with a smaller model. By the end of the day, we did not have a fully-functional game, but we had wireless controllers blinking LEDs and turning the cylinder, and that was enough to delight some children who were kind enough and curious enough to lend their services as game testers. 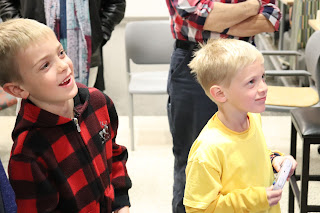 One team member had to leave partway through the day for an event, but we got a group photo around the table taken by a helpful hacker. 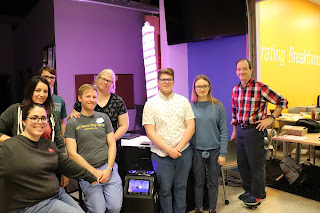 We set out to win the category for Most Artistic project, but we came away with the grand prize of crowd favorite, which meant that more attendees voted for, our project and we could not be happier with such an amazing end to the day. The rest of the winners were listed on the event page. 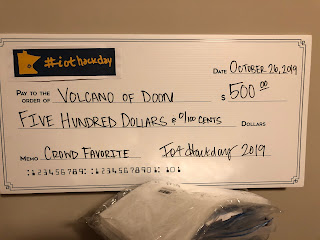