January 11, 2020
While I was looking up MIDI controllers, I strayed across someone who made a drum machine from foam and fabric. The soft circuitry held an Arduino Lilypad, copper tape conductors, and magnets to position potentiometers dressed up with foam spheres. It wasn’t the most functional, but it was highly approachable. 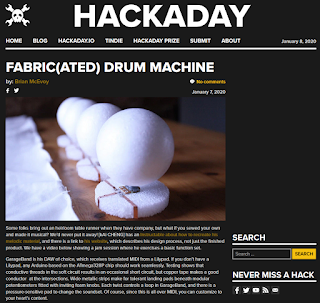 Since the first time I applied 32V to the electromagnets, I was worried I was burning them up. I intentionally programmed the shortest dwell time I could manage so they would not overheat. Now that I wired everything and finished a few code drafts, I wanted to run a torture test and see how hot the coils got. I ran them on a pseudo-random routine at 148BPM, so each magnet pulsed roughly once every three seconds. 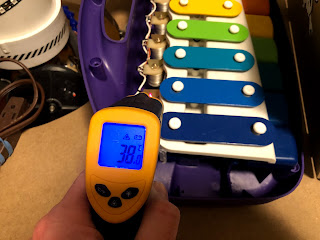 After the torture test, I started adding more modes. The first one added a note between the player’s notes. So, if someone played at 120BPM, the machine would play at 120BPM, but in the time between the presses so it would effectively double the tempo. It was supposed to feel like someone else is playing along at random.

Notes from the day

The yellow buttons worked fine, but I wanted MIDI to work in every way the hardwired buttons could. Before the MIDI inputs could not control the tempo the same as the physical buttons, so I added that functionality. Additionally, since I three single-player modes and a couple of two-player methods, I assigned the gray keys in the middle to those modes. 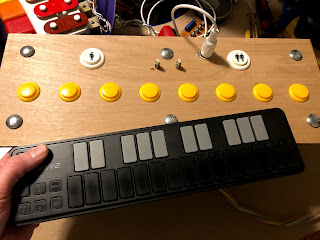 MIDI Keyboard controls the same as the switches

I finished all the programming, so I had to reassemble the glockenspiel. It turned out to be harder than I thought. Some of the plastic cover areas needed trimming to make room for the solenoid rack. While I was pushing the cover down, I broke one of the 3D printed brackets, but it was a weak model. It still needed replacement. 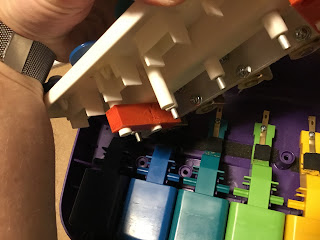 The printer seemed to be dispensing items in the correct size, but with lots of gaps. I thought this could be a case of a low flow rate. I increased the flow by ten percent, and then twenty percent to great effect. Some of the gaps closed, and the latest piece even felt weightier in my hand. These should be sturdier, but as the picture below shows, it is not perfect. The lower part of the photograph is 110%, and the other piece is 120%. 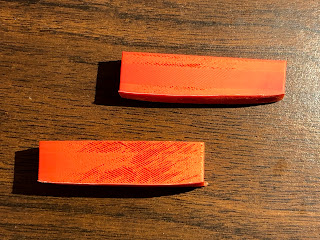