January 16, 2020
This badge was going to have at least eight LEDs. I don't have a plan for them, but they will be there. For now, and often in prototyping, lights are a great debugging tool because it is possible to check statuses at a glance. The strip of addressable LEDs I had on hand was from a different project, but they didn't work there, so I am not positive they are functional. Eventually, I gave up and cut them out of the circuit and tried another strip, which did work. I was glad the hardware was all working together. 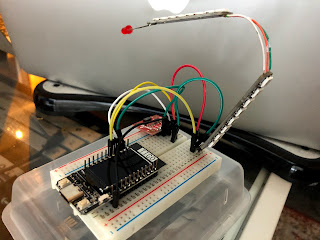 I wanted continuous feedback from red, infrared, and green statuses. The first LED is red and designates how much red light is visible to the sensor. The second indicator is green and reflects the available green light, and blue displays the infrared light. This pattern repeats across the light strip.

To display the intensity of each value, I had to scale the incoming readings. The best way I know how to scale unknown numbers is to keep track of the highest and lowest data points that number ever reaches and use the map() function based on those limits. As soon as I implemented the routine, the program refused to run. I looked up the equation map used and found that it is possible to input values for a denominator of zero, and the DIV/0 was the problem. I added an IF statement to ignore any condition that would try to divide by zero, and it worked. I scaled the lights from 0% to 100% based on the reading extremes, and it worked well.