June 02, 2020
The Android phone had a memory card slot, so I hunted my apartment for a microSD. I found a 4gb card in a tablet that I wasn't using at the moment. It took eighty minutes to copy 7,400 files from a USB 2.0 card to the memory card. Once copied, I restarted the video stream, but I kept getting sound from the microphone. The sound problems seemed to stem from an issue with the adapters, and a loose connection made the phone think I connected a pair of headphones, not a headset. As I ran the stream, I noticed how much energy this consumed because the phone was warm, and the battery dropped quickly. The feed was also unstable.

I thought some of the issues could be tied to the old phone trying to run bloated software, so I searched for a light-weight music player. Most of the players in the store were cast from the same mold and offered the same features. Many of the apps each had thousands or millions of downloads. I tried to update Play Music and run it with "Audio Glow" again, but that didn't fix any of the problems.

I settled on "Dub Music Player," which featured an on-screen graphic equalizer. Settings were cumbersome. First, I had to allow SD card access, and then I rescanned, then I found out I had to turn off the default, which ignored songs shorter than one second, then rescan. Each scan took two minutes and locked up the phone. Once Dub Music Player was shuffling songs, I restarted the video feed, but it would not stay connected for more than a few seconds, and then it stopped connecting altogether. 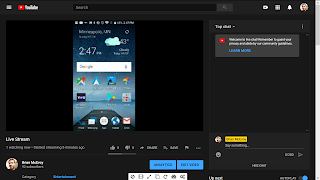 The rest of the posts for this project have been arranged by date. First time here?