July 18, 2020
I updated the code so that it would buzz when I passed over geographic north. Before, I waited until I was in a narrow band on either side of it, and hoped that would be good enough. It turns out that a creature whose life may depend on finding its way home is sensitive to a few degrees. Once I proved that I could detect the border and react to it, I created a new window that I had to exit before responding so I wouldn't annoy myself whenever I faced due north.

Whenever I received an unexpected vibration or felt that north "wandered," I had to guess why it happened. Through a USB cord, I could monitor the heading, but that wouldn't work for real-world testing, so I got around to example sketches using the Bluetooth module. I successfully ran an example that acted as a bridge between my computer and phone. Most of the code I understood, so I can move forward. 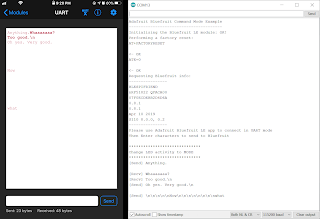 I transmitted live readings to my phone over Bluetooth, but there were a few issues. I could not send a newline command (return), so I had to add some tabs to keep the readings in neat columns. If I switched to landscape view on my phone or a different sized text window, formatting went right back to garbage. 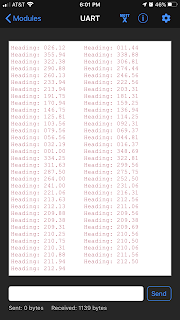 Finally, readings right on my phone

Adafruit's Bluefruit Connect app has a game-style controller feature that sends serial commands when an on-screen button is pressed or released. There is also a text window for incoming messages. Buttons are a simple way to send discreet messages to the device, and I was able to recognize them and print a "Success" message. 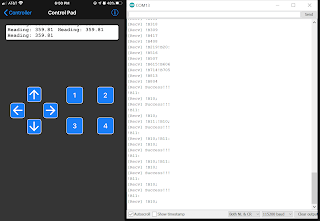 I can use this controller with my project

My connection between the phone and the device kept dropping. If I kept the two nearby, there was no problem. I removed the battery and measured the reception in a handful of different configurations. If I covered the Bluetooth chip with my hands, it would eradicate the signal. The next biggest culprit was the battery that I mounted on the module. Since I don't have a better way to bundle these, I used a button on my phone to temporarily boost the transmission power, but this should also help with battery life. Before this becomes an implant, I will test that it can transmit through a flesh analog. It was a hassle to remind myself to boost the transmitter power every minute, so I made it amplify after every button press. One of the buttons would request the current heading, which used to be sent periodically and got messy. Another button queried the battery level. The most crucial button would set the current direction to zero or north, so if the readings "wandered," I could get back on track. For fun, I programmed the arrow keys to control the LED as a strobe or adjustable brightness.