As a single day exercise in OpenSCAD I designed a program which would generate gears with only a few specific parameters. Those parameters were illustrated to show the versatility of the program. Two gears were printed and the first attempt produced usable gears which used simply wire brad nails as axles and they were simply inserted into a piece of corrugated cardboard. The gears currently sit at my work desk.

A new project was started which will span a long time. The goal is to make a standard base which will allow testing of wind turbine configurations. Testing will be done automatically and empirical data will be gathered as the turbines are tested in actual conditions rather than ideal lab conditions. Several turbines will be tested simultaneously and a commercially available anemometer (wind speed) will be monitored to record wind speed. The anemometer will not power anything, simply spin and have its speed read. Once the test base has been built different turbines will be tested for a minimum of 24 hours and successful designs will be tested against other designs to compare during identical conditions.

A sketch was made for the design of the testing unit. The premise is that a 5/6" (8mm) threaded rod will be spun by a turbine mounted at the top. At the bottom will be a small electric motor which will act as a generator. An Arduino will measure the generated voltage and speed. At first only two test stations were going to be built onto a single platform but eventually it was decided to build five test stations each on their own platform. 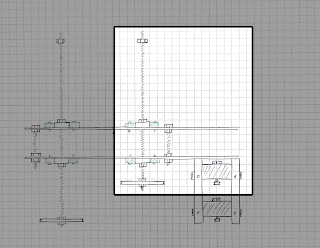 To facilitate easy spinning and reliable results a bearing pillow block was designed and printed. The pillow block was designed to allow any size bearing to be programmed but a 608 bearing pillow block was programmed and printed. To generate readable voltages from the electric motor a pulley program was written in OpenScad which allows the generation of pulleys with similar factors to the gears mentioned earlier. Similar versatility was programmed into the module. Carriage bolts can also be used to lock the pulley onto it by using the square end as an anti-rotation plug.

The premise of testing wind turbines is to be able to recycle 2-liter bottles into wind generators and get the most power out of them. Wind turbine blades have been 3D printed, made from fiberglass, wood, 55 gallon drums, and other materials but 2-liter bottles are ubiquitous and make small enough generators that they could be placed nearly anywhere and produced in quantities large enough to generate usable power. Generators could be shipped in great numbers in small packages since only the generator and bottle adapter is necessary while the turbines would be available at the generation site. 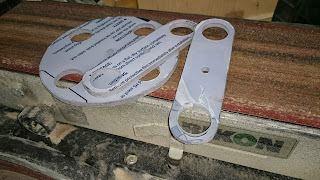 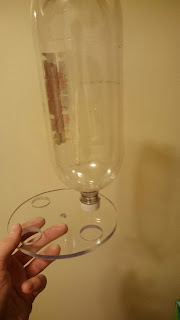 Bottle inserted into an adapter meant for four bottles