May 30, 2015
This week started with a convention of makers at Minne-Faire where I demonstrated the assistive devices I've built like the distance sensors.

Programming was done for the Wind Generator Test Base. Problems arose earlier when the wrong processor was ordered. The processor was supposed to be one which could emulate a keyboard so data could be input to a spreadsheet as it was observed. Instead the processor could not do that. Instead of replacing the processor the program was modified to output data to the serial port which could be pasted into a spreadsheet without trouble. Data was generated by taking many readings in a much shorter period than would be necessary in long-term data recording. After spinning the rods and recording some manual movements the data was pasted into a spreadsheet and a graph was generated to show the validity. This completed the Wind Generator Test Base. 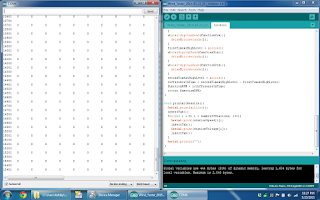 Serial data on left and program on right 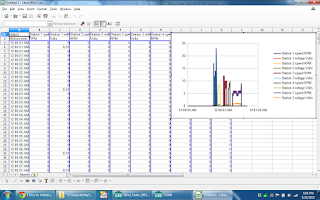 With the Wind Generator Test Base built the fun part could start. Being able to test different configurations of turbines was the goal. Building the turbines from salvaged material was the ideal but adding small changes to increase efficiency was also desirable. Necessary measurements were taken on a 2-liter bottle using a digital caliper. From the measurements a bottle mount was designed to be cut from a thick plastic sheet. 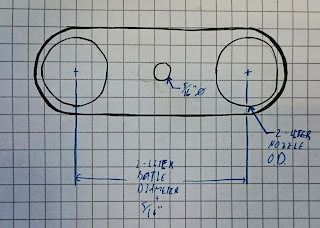 All the turbine designs require bottles to be bisected lengthwise. Bisecting marks were made by filling a 1-liter bottle with warm water and pouring it into a 2-liter bottle so it was filled half way. A marker traced the water line which provided a reference line for the cutting. 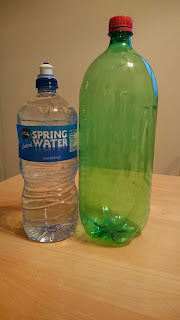 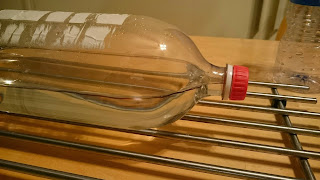