May 18, 2015
Most of the building for the electrical work was done. The stations were each wired but the controller has not been wired or programmed yet.

Reed switches, which are activated by magnetic fields, were soldered to the ends of twisted pair wires salvaged from a network cable. Continuity tests were performed to make sure magnets attached to the 5/16" (8mm) rod would activate the switch from outside the PVC. Magnets were 6mm x 2mm in size. Wires from the reed switch were soldered to a three-position terminal strip.

The third position on the terminal strip was the positive lead of the motor. Negative terminals were tied together. Clockwise, looking down, rotation produced a positive voltage so leads did not have to be reversed. When wind turbines are attached they will have to be arranged so rotation is clockwise which should not be a problem. Reverse voltage could cause damage to the microcontroller. 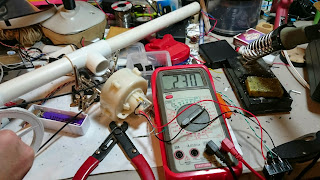 Reed switches were fastened to the sides of the PVC adapters using plastic ties. Wires from the motor were also fastened in place using plastic ties. When the wires were secured test leads from a meter, set to measure continuity, were held under the screw terminals and a magnet was placed on the shaft running through the PVC adapter. Careful magnet positioning was done to get a reliable reading for each rotation of the shaft. After positioning the unit was reassembled. 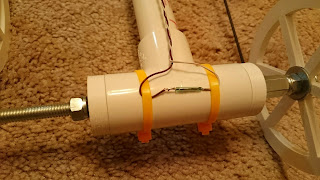 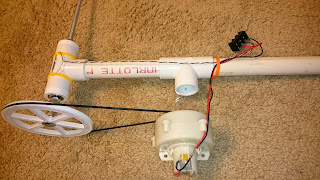 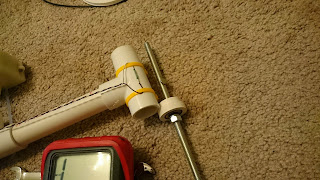 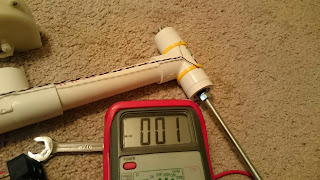 Electrical work was done so each station was arranged on cardboard to protect the surface underneath in order to glue the terminal strip in place. Strong adhesive was applied to the motor mount piece which provided a flat surface suitable for mounting. Terminals strips were pressed into place, clamped and allowed to dry. 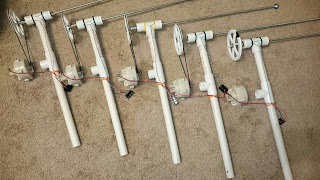 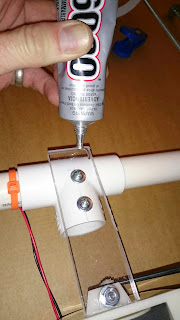 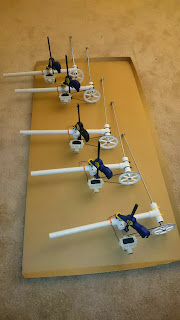