June 10, 2015
The Self Contained Haptic Distance Sensor could be a great piece of technology for people who can't see well but it requires special mounting due to the servo which presses on the user. This is inconvenient without a 3D printer. While working on the Cyborg Distance Sensor the relation between distance and vibration was quickly understood. Unfortunately the distance sensor is not a highly precise instrument and the servo cannot rotate quickly enough to keep up with the erratic behavior of the distance sensor. Inconsistencies from the distance sensor could be toned down in software at the cost of precision but a faster servo would weigh more and could double the cost of the whole project. A small vibrator became the feedback mechanism for the latest iteration which is small, inexpensive, runs directly off a digital output, and can fit inside the enclosure next to the rest of the electronics. Overall the size and convenience has been improved as well as usability.

The program was based off the Self Contained Haptic Distance Sensor program but modified to output a PWM signal to an output pin. The Arduino Mini Pro was swapped out for a smaller board which used an ATTiny85 chip. ATTiny85 based Arduinos do not use a USB to serial adapter but communicate directly with the computer through USB. These chips have not been used in this blog previously due to their finicky nature and difficulty to debug. Since this project was relatively simple and based on working code the chip was used.

An Arduino was programmed before soldering to a distance sensor. The on-board LED was programmed to act as the variable output. The on-board LED with a PWM pin was an advantage over other Arduino models which was appreciated. After programming the Board stopped responding. Research was done it was found out that the communication pins on an ATTiny85 are 3 and 4 instead of 0 and 1 like most previous Arduino models. Once the pins were sorted out the board would accept programming but the boards were repeatedly soldered and desoldered until a breadboard was finally employed to assist in the prototyping. 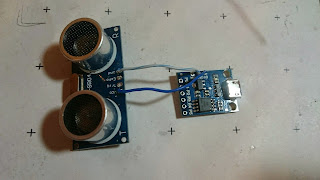 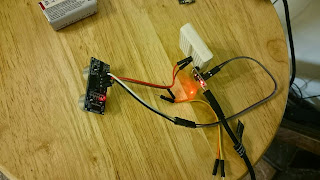 Breadboard prototype after a lot of grief

Breadboarding would have saved me a lot of trouble. 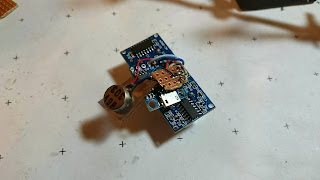 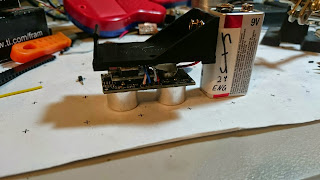 To Do:
The rest of the posts for this project have been arranged by date.
First time here?