June 20, 2015
This week has been about the vibrating distance sensor. Programming had been finished but a suitable enclosure was trickier than expected. After hearing the idea to use a flashlight handle for the case it has consumed this project's time to finding a neat way to build everything into an inexpensive flashlight.

Flashlights were purchased from Amazon and a faceplate was easily printed which replaced the lightbulb and reflector with a distance sensor. The electronics and battery clattered around in the handle but it was fully functional. There was no switch so the only way to power the unit down was to open the flashlight and disconnect the battery. It would have been easy to drill a new switch hole and mount a different switch on the outside which would have saved a lot of designing time but it was important to have a clean look and using the original switch would make for the most intuitive way to turn it on. 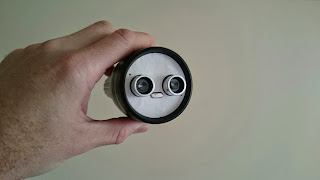 Changes were made to the adapter which went between the flashlight and distance sensor. Instead of making the adapter thick enough to fill the gap between the flashlight handle and bezel, where the reflector and lens usually went, a ring was raised around the outside rim to conserve plastic. The ring was broken where it would touch the distance sensor so there would be a pocket and everything could sit level.

Animation of changes to the adapter

Adding a post to the adapter was supposed to allow a reed switch to be attached which would kill power unless a magnet was present. A magnet was going to be attached to the moving switch parts to activate the reed switch but tuning this system proved to be more trouble than reasonable. Despite not testing this method a set of instructions was started which aimed to build the distance sensor however the instructional images were abandoned because the switch would not work. This was not a proud moment. 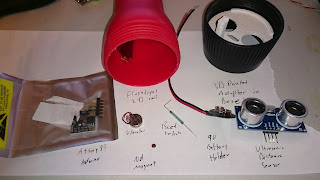 Two pieces were modeled which were meant to sit on the lip of the flashlight and hold a tactile switch under the moving flashlight switch parts. Foolish mistakes were made in the model so it would not even fit together correctly and certainly not function. While trying to figure out a better model it occurred to me that instead of putting a module only at the opening of the flashlight it would be easy to run a piece from the bottom of the flashlight to switch where it would be securely held in place. 1" schedule 40 PVC pipe was very close to the diameter of the power cell compartment so a piece was cut which could hold the switch and also hold a 9V battery. 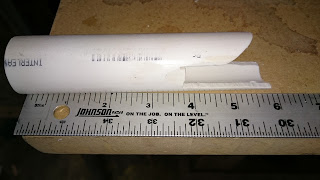 Since the design had undergone several changes over the week and a working switch method had still not been found the schematics were drafted on a computer so they could be changed until a working method was proven. While drafting a dimensioned diagram was also drawn for the adapter so anyone could replicate the piece on a CNC machine or laser cutter. DWG and PDF files were provided in the journal entries. 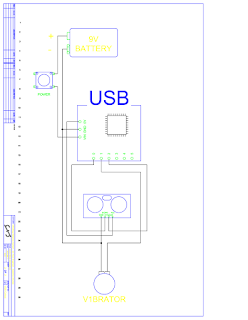 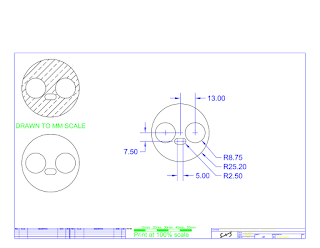