I have a little gray cat named Isla. She likes to help with some of my projects and wake me up at 4am to play fetch. During the winter she spends a lot of time monitoring a humidifier which would occasionally bubble up. Bubbles amuse her to no end. I had an aquarium air pump for a different project which didn't pan out. For the purposes of the project the pump was controlled by a 5V relay and wouldn't run without it. I figured it would be nice if she had bubbles all year round so I spent an evening cobbling together the power supply and power cords necessary to get the air pump running.

At first I wasn't going to even show the work I was doing on this project because it was just me putzing around with the modified pump. Instead I decided to make this into a project which would not only feature the air pump but a laser light show for cats. Automated laser toys for cats aren't original but I have been itching to try to make a cheap laser pointing device I can control myself. Commercial models are at least $12 which isn't bad but I want to be able to control them myself.

A relay controlled air pump was turned on by hard wiring a power supply to the relay coil. One issue with this scheme is that there are two plugs which is dangerous in devices because a regular user may assume all power has been removed when a single plug has been pulled. This will have to be fixed in the final build. 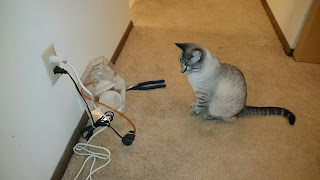 Pump control was already built. Designs for a microcontroller automated laser pointer had been conceptualized before so the components of this project were just an assembly of previously designed parts. Pseudo-code was drafted by hand which will control the two systems. While documenting it was decided to add two switches which would allow the user to manually start either process at will, otherwise the sequences will not execute until a randomized timer expires and starts the sequence starts automatically. A speaker was also added which will emit chirps to alert a cat when a sequence is about to start.