July 14, 2015
An enclosure was being decided upon. Measurements of a Arduino protoshield were taken to model a 3D enclosure. Blender was going to be used for the first time since it was reportedly a powerful and free modeling program. Instead, a solution was taken from projects which predate this blog. Rigid baseball card holders make good Arduino cases because of their size. Sides of one case were cut using an 18tpi saw blade. All wires would be run out of one side of the enclosure. Baseball card cases are great enclosures for many projects but care must be taken because they are often brittle plastic. 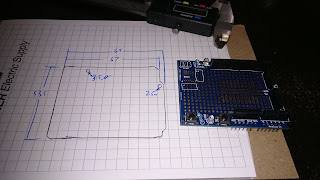 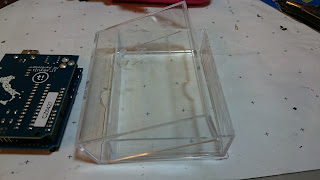 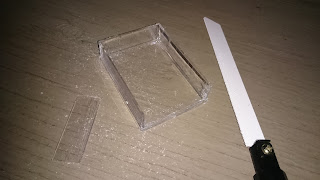 Soldering was done directly to the protoshield and no soldering was done to the Arduino itself. Pins were all connected to their respective points. Buttons were attached to the top of the shield, servos were attached with angled header pins for modularity, wires were run for the laser, the piezo speaker was soldered directly to the board, and the pump connector was given a screw terminal on the underside of the shield. Holes were made in the top of the enclosure by pressing a hot soldering iron through the plastic which created unattractive holes but drill bits often shatter the brittle plastic. 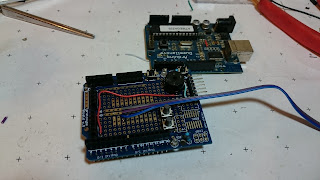 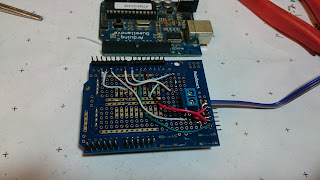 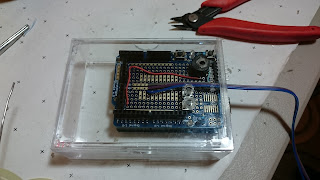 Hot glue held the servo base to the baseball card enclosure so the unit was neatly portable even when held with an additional power supply. After assembly pictures and a video were taken of the servo shining on a wall. Originally the baseball card holder was going to be laid on its largest plane but the servo cannot easily shine on nearby walls so a heavy base will be constructed which will anchor the device on its side and decrease unwanted jarring.

The clear enclosure may serve another purpose which was not brought up before. A light sensor could disable the laser routine so there is no rambunctious cat activity while people are sleeping.