August 01, 2015
It's been a while since I narrated a video. There was no fancy microphone and I didn't rehearse as much as I could have but it turned out acceptably for a quick video, less than two minutes. All the functions I wanted to duplicate from the commercial reader I installed in my car were translated plus a security feature not found in the commercial versions.

Completing this project wasn't like the others because it hasn't been implemented. Future projects will be able to use this code and hardware to quickly build an RFID project. Implementing a servo, which will be likely for making a deadbolt turner, would be simple. Making another car door unlocker actually has enough programming already.

A new project was started which will hopefully turn into a piece of wearable tech. A handheld keyboard has been on my mind for a few months and after a night of intense brainstorming I had the idea to make collapsible keys which press on inexpensive switches. Making each collapsible key identical meant that a single design could be refined and repeated without having to build a completely custom design for each finger. The idea was sketched, modeled, printed, and tested. 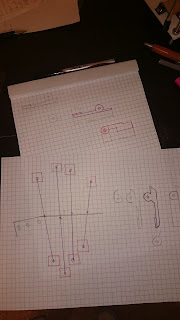 After playing with the first switch, which printed in white, three more were printed in black. A long threaded rod and locknuts were used to hold everything in place. A hole was drilled in the back and a second rod was used to secure the keys from spinning. The keys were printed to be the same size as standard keyboard keys and the spacing was laboriously done with locknuts to make them the same distance apart as keyboard keys. A second version was made which used a more convenient bolt size for the axle. Four copies were printed. 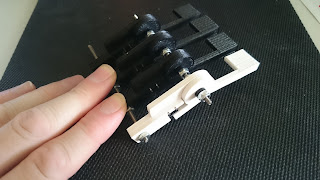 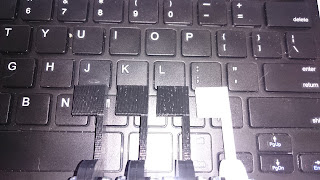 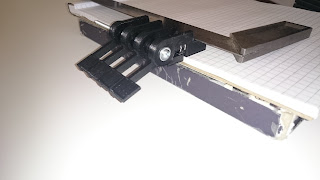 A third version was modeled which used a built-in axle so the key lever, blue, would not rest on the rod holding it together. The plastic it rides on was part of the receiver body, green. A spacer, purple, was modeled to keep the key lever seated properly. The modeled spacers were important since a single bolt and a single lock washer could be used to secure the parts while the key lever could move freely and no finicky measurements had to be maintained.